Attach-extend on the side, tenuki 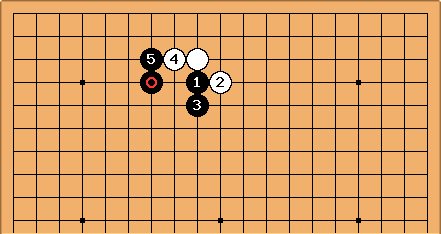 These plays in the attach-extend pattern often occur displaced along the side: it might be as a middlegame joseki, but there are also a number of corner joseki that show this pattern, in which

Suppose White now plays tenuki. One case in which this is frequent is in double kakari joseki, when White wants to pay attention to the group on the other side of the corner.

In any case this is a situation for which there are a number of standard patterns. 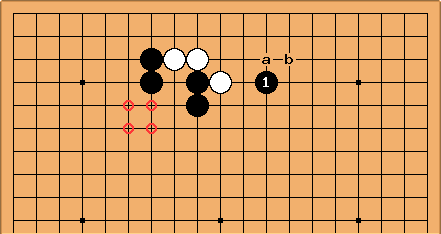 is considered the vital point for attack. It is not the only choice, since Black at a is also played. Black at b can be noted, since Appreciating Famous Games comments on it. It lacks severity. It has, however, been played by some very strong players.

What happens now depends to some extent on Black's shape (matters may be affected by black stones at the marked points that protect Black's cutting point weakness), and White's interest in coming out to the centre.

There is this way for White to try to live quickly (immediate life): 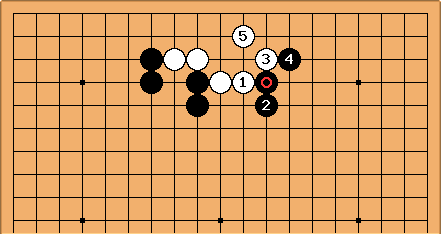 , it is hard for Black to prevent White living on the side. It is true that Black can stubbornly play

; but then White has an easy exit to the centre. 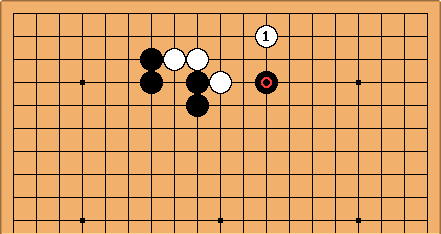 here, which low but light. It is more like sabaki since Black can aim now to capture stones but finds it harder to attack all-out. 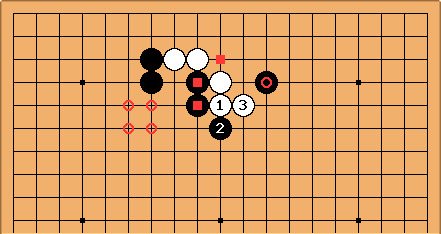 In the majority of cases seen in pro games, we get

played. Evidently White has acquired an empty triangle; and a good question is, 'why'?

So, backed up by the 123 principle, we can ask about simply coming out at

. This also is a defective shape, though, according to compromised diagonal. You can say that

immediately does nothing to prevent

This isn't a simple question. There may be three factors operating:

On a statistical basis,

is played much more frequently than not (this may not be a robust conclusion with slightly-changed searches).