An alternative method for diagrams and handwritten go records

In standard go diagrams a number N indicates that the move was the Nth play in the game. This page proposes an alternative.

First let us note that white and black moves are nearly always shown differently. For printed diagrams white moves are shown with white circles, and black moves with black circles. For handwritten game records, people either tend to draw a circle around white moves, or use different colours.

In this alternative method, a number N indicates that the play is a player's Nth move. So a game will start with

This method can also be used for variation diagrams, even when White plays first. All that is necessary is to add a caption which makes it clear whether

" would mean that the diagram shows 10 moves, with White playing first.

Here is an example made using GoWrite 2, giving the first 49 moves of a game in 1978 between Takemiya Masaki 9D (black) and Fujisawa Hosai 9D (white). Making this diagram took more time than making a standard Go diagram, as at each move the number to display had to be reset. 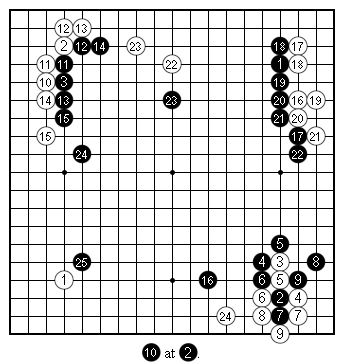 Here is a handwritten game record, giving the first 101 moves from another Takemiya game. (Again Takemiya has Black, playing against Cho Hun Hyun, in 1990.) 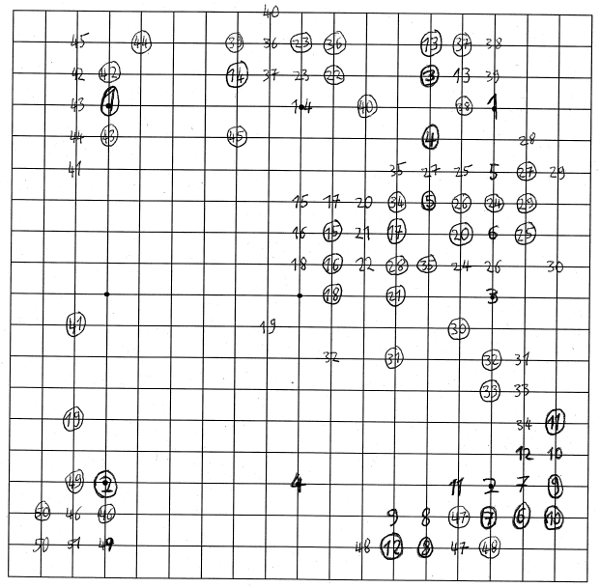 This method's main advantage is that the numbers go up half a fast as with standard diagrams. To ease legibility and save space, it is preferable to avoid having to write three-digit numbers in diagrams as much as possible.

A disadvantage: existing Go software is not designed to make this sort of diagram.

fanfan: maxiGos can do this. See

Please add your comments here, rather than cluttering up the preceding sections. Or better still, use the "discuss page" link at the top.

tapir: While this is probably easier to read, you have to use two different pens or draw circles while writing the record. The standard approach allows you to just put down the numbers during the game and make the ornaments (circles around the white stones or whatever you do) later, so I am not sure whether this is really saving time in the critical moment (e.g. during a tournament game).

Bill: When I was living in Japan, official recorders used two pens, one red and one blue. They held both pens in hand at the same time, and were quite dextrous in handling them. :)

isd: The best kifu is the 20x20 write the number in the box kifu. This means you don't have a plus sign through all your numbers. I have a nice high quality paper record book from Japan, green lines. I write in different colours every time I go over another 100 mark. I do not circle white stones. This is what works for me in terms of clarity :)

Phelan: One of the hardest parts for me is to have a reference when writing new moves, so distinguishing black and white is pretty important for me. different color pens work best. I sometimes mess up the numbers, either going back a few, or jumping up a few. I think having both colours numbered as they normally are helps me recover from those errors.

axd: I solve Phelan's reference issue by numbering the move as usual but I put a circle around the one-but-last move: the last played move number is always the move without circle. (I use a single color pen.)