Like other people, go players use language in a loose, informal way. So it is with life and death. A group may be alive at one point in the game, but dead at the end, and vice versa.

There are groups that are absolutely alive, even if their owner always passes.

It would take two plays to capture the Black stones, but White cannot make even one play to do so, because trying to play on one of the

points would leave a stone with no liberty, and that is not allowed. (Even if were, the stone would be removed before the next play.) The

points are called eyes and groups with two eyes are alive.

When go players call a group alive, they often mean this kind of situation.

Black is alive, because

if White tries to kill Black's group, Black has a reply to save it. If

, and vice versa. Note that after 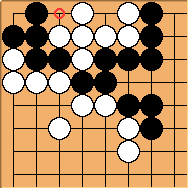 Another way to live is in seki. The Black and White groups in the corner are in seki, mutually alive. If either side played a stone on the

point, they would put both groups in atari, and the opponent could capture their whole group.

Groups in seki are not absolutely alive.