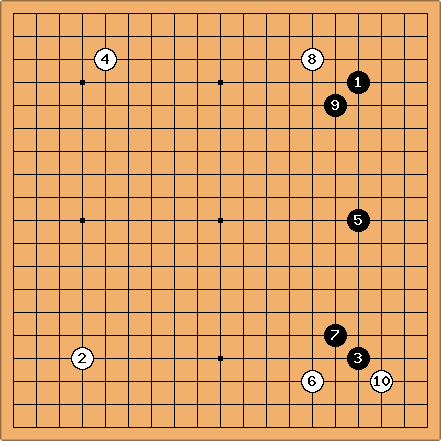 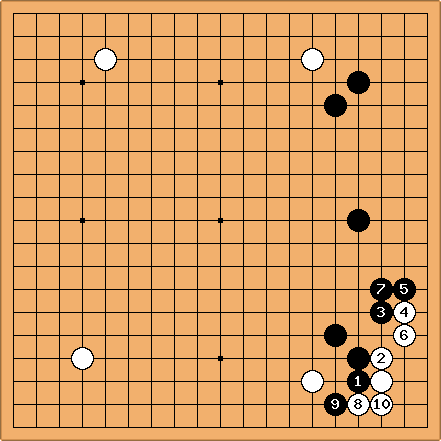 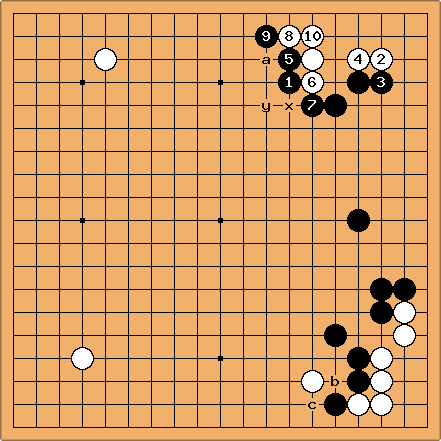 Bob McGuigan: I think so far this favors White. Black has put everything into the right side which has been narrowed considerably by the white corner invasions. The black stone on the star point on the right side ends up too close to the black thickness below. Black development on the upper side is impeded by the 3-5 stone in the upper left and the possibility of a white cut at a. Black development on the lower side is interfered with by the lingering possibility of white b or c.

Klaus: Interesting thoughts of a stong player! However, I would dare to dissagree (of course not becouse I think my judgement could possiply be better than yours, but yous to hear what is wrong with it.) Black is not fighting for tha side, but for the center. The right side is just needed as a bottom for a Takemiya Masaki like moyo. Therefore the cuts at a or b are not too importand, because white can still be pressed lowe here after he cuts. Actually I thought black should rather cut at x than at a, if i is going to play at the upper side. Blck is prepared for a tough fight here thou. The master of cosmic style himselve played that side settup too, but I am not sure if he ever used it against the white 35 44 position. So if the black settup is wrong, I assume than this might only be due to the difference between the 35 and 44 point on the left side. However I am far to week to see the fundamental difference.

John F. Interesting, Bob, because I rate this as very good for Black. My thinking is:

The position's not finished - Black has to play at X. Assume then that White plays at the centre on the left side or shimari top left. In balance sheet terms this is tantamount to both Black and White having played three stones on respective sides of the board, but Black has already tempted White to invade both corners small scale. Black likewise has to do something about White's three-stone side, but he now has many more options because he has lots of thickness in place.

Looking at the balance sheet in a different way, White has about 15 points on the right (Black X leaves sente against the top corner). To get his normal average to stay in the game he needs around 55-60 points (361- average no. stones played, say 245, - some dame), so he has to find about 30 points from somewhere. The reality, though, is that he has turned this into a big moyo game already through his corner invasions, so the likely points total he needs will almost certainly go up substantially, let us say (on the basis of experience - these games seem to finish in 200-220 moves) he needs an extra dollop. Let's say he needs 45 extra points. Will the three stones on the left yield that? Probably not. If he makes a shimari, top left, that averages out at 16 points of territory. Must be less for one stone in the lower left. He probably therefore has to go for a centre-side play and hope he can get some synergy between his three stones to generate extra points.

The cuts at a and b are too small-scale at this stage, but in any case, insofar as they are valid, they would be miai and so can be forgotten about on the balance sheet. In fact, however, Black X more or less makes a non-cuttable point.

If you like this balance sheet approach, which pros use but don't call it that, you can use it more widely, treating groups as miai objects, for example. (When I say pros use it, I know they do in handicap games, for speed. I'm not sure how far they use it in pro-pro games, but they do to at least some degree.)

Bob McGuigan: I appreciate your analysis, John and I am sure I would lose this game if I were white and Takemiya were black :). I was basing my judgment on black's stones being seriously over-concentrated on the right side and the center being wide open.

Bill: I also like Black. I am not sure whether to play Bx or By next, but Black's wrap-around wall in the top right will be worth more than White's top right corner plus White's left side, IMO. I agree that Black is a little overconcentrated in the bottom left. However, White's corner invasions were premature. It looks like White should have responded to

Bob McGuigan: Actually I think Bill is right. An extension from

would develop the upper side and make it harder for Black to deal with the upper left corner, as well as limiting Black's potential in the center.