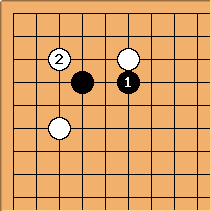 "is the most common way". How should Black respond to 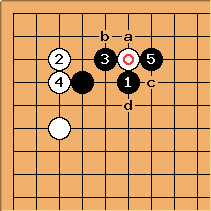 Alex Weldon: This is seen fairly often, at least in amateur games I've watched. It seems about even to me, considering that B played tenuki once.

has aji. W might consider pulling out at a to get B b in response as a kind of probe to increase that aji. It also gains some credibility by being similar to a two-space high pincer joseki, in which W makes a second approach in response to the pincer (the sequence is the same, but with a pincer stone in place). W often exchanges W c for B d before playing

, to increase the aji in that joseki (in which case

has to be at a to avoid damaging the pincer stone), but apparently that's just the traditional Japanese way; the Korean style is to omit the c/d exchange, as shown here (that last bit of information taken from a Go World article).

crux: I've done a search in GoGoD and found that Sebastian's original position is very rare (10 matches only). Normally, White plays the hane in response to the attachment, rather than invading the 3-3 point immediately. This move becomes slightly more common when there are additional black pincer stones on the top side. There's only one match for the continuation Alex suggests, so I assume it's considered too slow. 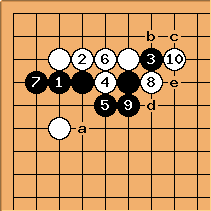 (Sebastian:) Here's how we continued.[1] I don't think this was good. At least move 11 @ a was surely a mistake. After that, White tenukied.

in the diagram is huge. Without reading I can almost guarantee that 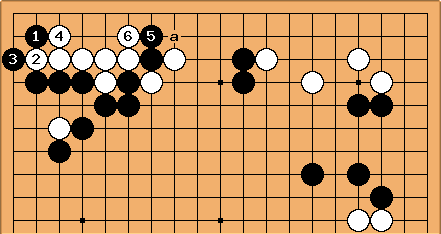 (Sebastian:) Actually, it wasn't as bad as I thought. At a later time (move 58 in the game) I should have invaded at

is very, very wrong. It absolutely must be at a. This is a simple case of counting liberties.

http://files.gokgs.com/games/2004/11/6/Bashan-Malcome.sgf moves 16-28. Colors and orientation changed to fit this discussion.