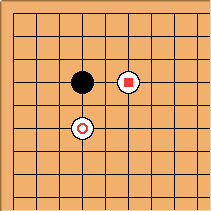 Once White has approached high against Black's 4-4 point, for example with

, it is definitely severe if Black allows White the second high approach at

In fact White's second high approach here is such a good play that pros are quite reluctant to allow it. When it does occur in high-level games, it is often involved in some ladder strategy. 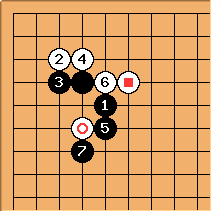 This is the common continuation here.

White gains territory and takes sente; while Black cannot yet be considered secure. 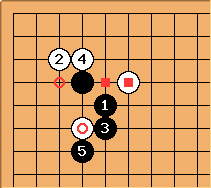 This variant is also seen. Black avoids making an exchange that mostly firms up White's shape (Black at the circled point versus White at the squared point).

It is also possible for Black to play moves looking for quick life in the corner: but the cost in outside influence conceded to White will be high. 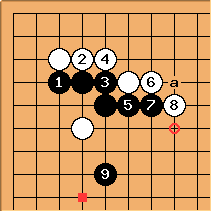 I seem to have had some luck playing for big walls out of this in high handicap games where my wall is backed up by a side stone (just past the square). The empty triangle (unmarked black stones and

) and the short extension of nine are the price one pays for having played elsewhere and allowed the double approach (at least that is how i think of it). Without a side star stone in place, this price is very high since the orphan white stone can run away too easily. The circle is big for both players (white usually plays it) but that gives black sente, which is also worth a lot. I am not suggesting that this is optimal play, but it is uncomplicated, solid and generates about as much territory (assuming you don't mess up and let white live underneath) as white gets. I welcome critiques from higher level players, as my success may be a quirk of my most common high handi opponent.

at the circle, particularly if I have a center star stone in addition to the side stone. I have to admit I cringe about black running along the 5/4 lines though. 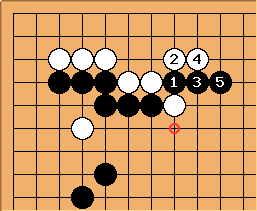 Warfreak2: White's hane here is a little aggressive (probably due to this being a high handicap game), the cut at a later is shining. 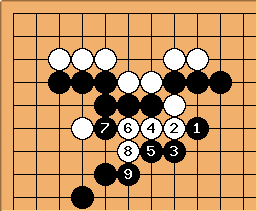 This even works with white at the circled point, although in that case there is no loose ladder to capture the cutting stone later. 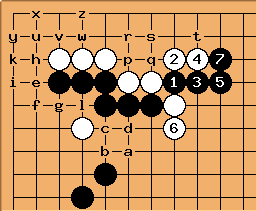 from below looks bad.
If

is big (p-t; perhaps sente?),
whereas a tactical idea White a-l seems not to work,
because white l takes away an own liberty. 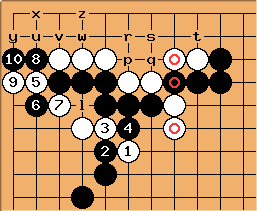 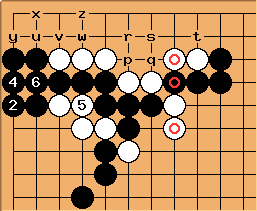 and now itÂ´s 2 white vs. 4 black liberties (in the corner=,
W cannot fight like this. 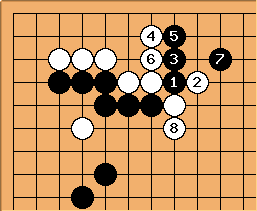 tderz: What to play then? (if one has chosen this path at all)
I would always also investigate the other atari.
If I donÂ´t like this path so much either,
I wouldnÂ´t have chosen exchanges