Dieter: Years later, I do understand the 4-4 point. It differs from tengen in the sense that, if White enters the corner at 3-3, Black hems her into the corner, building a thick wall influencing sides and centre. If White doesn't enter, Black has the corner by default. I'm inclined to refactor below discussion.

As dnerra points out in his ideas on improvement, regularly reviewing your own prejudices/heuristics is the soil of progress. He also warns against automatic play. Now lately I have been thinking about the 4-4 point, something we sure all think to understand, and the more I think about it, the less I understand about this opening move.

That's what the 4-4 point page says, and it's a very nice explanation. Still, isn't the 3-3 point much easier to understand ? A stone on the 3-3 point controls the corner in one move. Period. No question of sharing the corner: you take the corner with one move. The game is one of territory and so is the opening move at 3-3. Easy to grasp, easy to execute, ... rarely played.

So, 4-4 is about influence rather than territory. OK, I know a move which is completely about influence. It's a magical move, it's a unique point, it's tengen. A stone on tengen radiates an equal amount of influence in all directions, it catches many ladders, it splits the enemy on a global scale and connects your own stones on a global scale. It's easy to grasp, perhaps not that easy to execute, but again ... it's rarely played.

People do not play at tengen, because we are told to play in the corners first. When asked why is that, the answer is that the corner is easier to control and usually follows an explanation with how many stones you need in the corner to make a certain amount of territory.

BUT 4-4 DOESN't GO FOR TERRITORY ! Even enclosures based on 4-4 do not take complete control. 4-4 is all about influence, but if that's the case, why not play tengen right away ? The answer must be in the strikes a balance statement, but I find that very difficult to grasp. Yet, 4-4 is the most popular opening move.

San-san and tengen are moves that I understand. Komoku is a move that I can also relatively understand: it takes control of part of the corner and aims for control of a big corner with a shimari. The opponent prevents with kakari and then the principles of enclosure/escape, territory/influence come into play. 4-4 is an awkward move, flexible to the point of throwing dice.

Maybe that flexibility is why 4-4 is so popular.

BUT 4-4 DOESN't GO FOR TERRITORY! This statement is a little too strong for me. You know, without all-caps, I might actually have accepted it, but the way it is...;) My feeling is that by san-ren-sei and Takemiya etc. many amateurs have been brainwashed into thinking that 4-4 points are there to build huge moyos. I think the way 4-4 is used in modern professional games, it can be quite territorial, actually. Of course, if Black plays 4-4, White can enter at 3-3, but that is so bad on an empty board, that it can well be disregarded. Instead, let's look at a typical joseki: 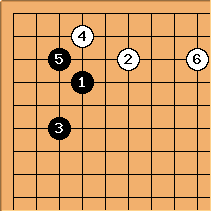 This is an fair division of territory in my book...

Andy Pierce: In this figure, it's a fair division of territory, but notice that white has lost sente. The 4-4 point is flexible for the player who takes it. If white wants territory under black's 4-4, white cedes too much influence. If white wants influence, there is a territorial cost and black gets to pick where white's influence goes, not white (pincering a white approach as necessary). The 4-4 can in some circumstances be used to make territory, but not as efficiently as 3-3 or 3-4; this is the price paid for added flexibility. More typically, I see kyus playing 4-4 for territory being greedy and trying to overplay the stone.

, Black can play there later and make one of the most efficient corner territory formations with 3 stones possible: 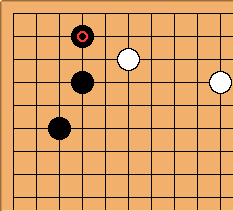 Compare this to a 3-4 point, low enclosure, extension, where white still the standard probe move below the 3-4 point (or sometimes on the other 3-4 point) to reduce the territory. (As an aside, the value of the marked black stones is undervalued by many kyus and low-dans. Maybe because they forget that 4-4 can be used to make territory.) --dnerra

Bob McGuigan: Dieter's comment above neglected to mention another way in which the 4-4, 3-3, 3-4, and 10-10 points differ and that is potential for development. The 3-3 stone is relatively difficult to develop from efficiently. The 4-4 point stone is very easy and flexible in development. The 3-4 stone has good potential for development, but it is slower than the 4-4. The tengen stone is also, I think, difficult to develop easily.