aLegendWai: Here is my idea. You may agree or disagree.
My advice is to abandon the 5 W stones and make a exchange (Your 5 W stones will not be wasted. Trust me :D). Black is strong in the upper side, so it is no good to struggle. Let Black takes the upper side. White takes the left side (and I think white should have friendly stones in the bottom part, right?). 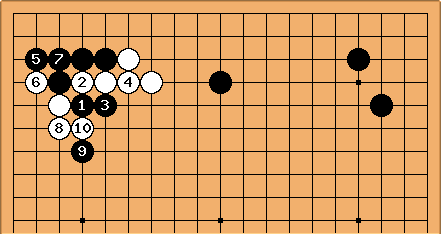 PatrickB: A few concerns about your suggested approach:

aLegendWai: Thanks for your idea about the probe. I completely agree with you. But I think you misled that the probe is immediately played (sorry that my words are that unclear). I just show some more follow-up moves later on. The probe move is one option.

By the way, when B choose to hane from the outer, W may decide not to finish all moves and plays elsewhere. Then the W corner stone(s) can be a threat when W attacks the side.

Ar! Also even if B hanes from the outer, W may decide not to live small in the corner and cross-cut B.

You may choose to attach the B stone in other directions. Too many options indeed :P

(PS: In fact, is it possible to put a W stone with a letter label on it?)

aLegendWai: PatrickB, relating the strategy of abandoning the W group, I may be distracted by the statement (made by kokiri). The statement (5 Nov) is I ended up having to make life for two weak groups while black tried to escape with his centre stones.

This makes me assume saving 2 groups is a burden unfavorable to W. After longer pondering, it seems W may manage to keep both groups live without helping B too much (because the middle B group is not safe either, it won't launch attack so freely).

Anyway let's assume the whole-board situaton unfavors W to escape. This only keep W busy with saving both groups (because my suggestion is more or less based on this assumption).

You said the discard of W group is worth 40 points. I think you do not mean B can gain 40 points after the capture. To me, B gains about 19-20 points in capturing W only.

I think you are talking about the Deiri value or the value of difference on this capture. Even so, I beg to differ.

The capture looks very large, but not indeed.
(Any further discussion is welcome :P)