kokiri Has anyone followed this? If so, or even if not, what do people think of

? It's nice to see people throw the joseki book out the window, but if I didn't know who made the move, I'd say it was a 10 kyu error... 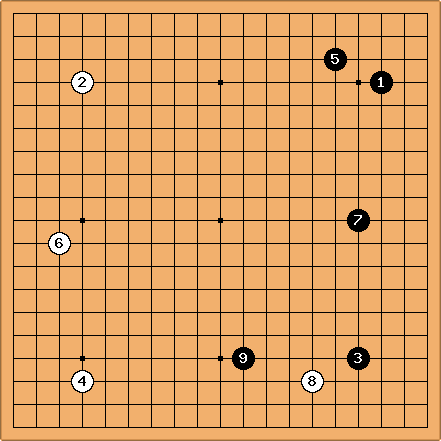 All well and good so far...

is interesting - I've never really seen white play the chinese style, but I think Charles Matthews has written that it was originally a white strategy that black picked up.

is interesting. Against the

since the enclosure in the upper right makes Black's moyo more solid than in the san-ren-sei.

is a territorial move, though, so White is not going for a moyo. 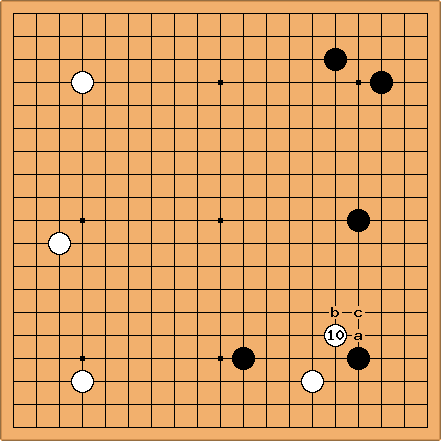 - wow, if I were commenting on a mid kyu game I'd suggest this was a mistake.

I'd be really interested in hearing what people thought of the move.

kisei site is something like: 'this is a very positive move - I've never seen it in this fuseki.'

I suppose that if black makes territory with the sequence a, b, c or the like, Hane ends up flat along the right hand side and white's development covers the whole board, but still...

aims at attacking on the lower side.

kokiri: A quick use of GoBase gives a grand total of 4 examples of

as a response to the pincer and three of them are effectively in the middlegame so don't really count. The other game is Hikosaka Naoto - Tsuchida Masamusa from 1973 (see below)

John F. GoGoD has 8 examples, but not the one above. Fan Xiping in the mid 18th c. gets the credit for playing it first, but this seems to be the only game where it's played at all early. But there is an early-in-game example with the smaller high pincer in 1980 by Sekiyama vs. Hashimoto, and we have four examples with the wide but low pincer. 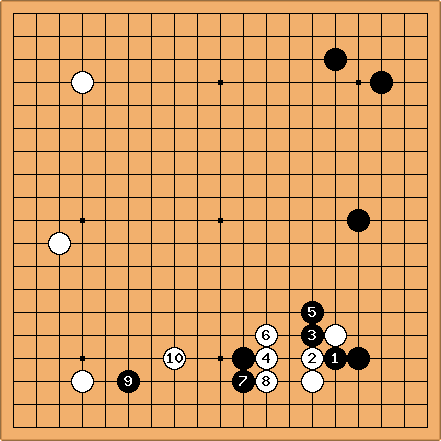 are said to be typical of Yamashita's thick style, and

is typical of Hane's fast development. 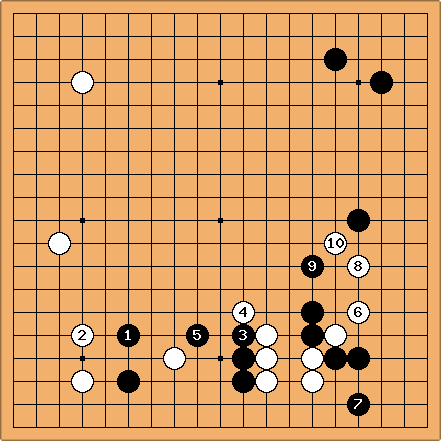 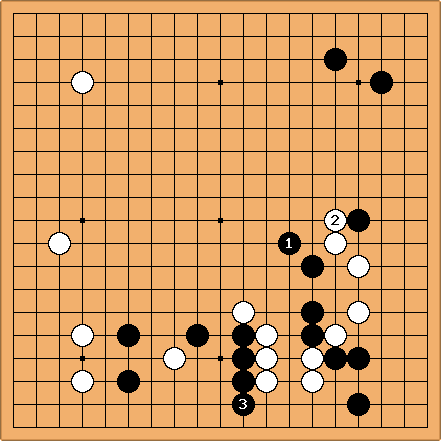 Move 34 is the sealed move.

John F. The Kisei site says Hane took over 1 hour on move 27, even though it was a predictable move. Up to

was a natural development (implying, presumably, that 31 was not natural), and 33 was a bit of ijime before turning, probably, to the right side. Food for thought: if one side can get a bit of ijime in this early, presumably he's already got a better game???

barry I don't think that they are implying that 31 was not natural, just that black had more choice. Black could have played around 32, which would have chased the fighting to the left.

) it was a kind of mutual attack situation but with

I think the balance tipped in Black's favor, but I'm certainly no 9p. There is still a lot of unresolved stuff here, such as what aji there may be in the lone white stone.

k - here is the Gobase game I referred to: 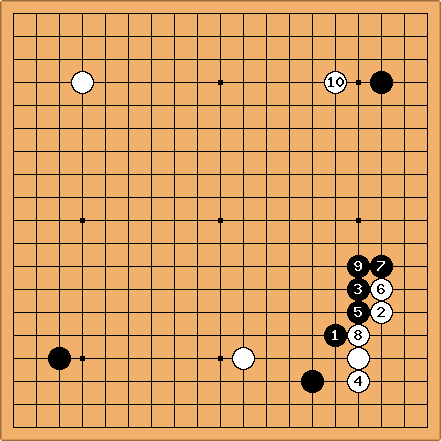 ...none of which offers much insight to the game in hand.

Dronak: I've been trying to watch some of these title matches to see how much of what I've read from here and other places I can pick out in the game and to see if I can learn a little bit from other observers' comments. If anyone here would be willing to give me some very newbie level descriptions of what's going on and why, perhaps while watching the game(s), I'd certainly appreciate the help. And I understand this may not be the most interesting way for you to discuss things, so if you do chat with me but it gets boring or whatever, I'll totally understand and let you go do something else instead. Thanks. :)

John F. We Brits are into irony, as our American cousins well know. I couldn't help but be struck, therefore, by the facts that there is Brit connection with this game and that it is taking place in the Japanese wing of the Rokkaen. Explanation: Josiah Conder was a Victorian architect who made a big name for himself in Japan - he was even Minister of Works at one stage, I think, and I also believe he was instrumental in bringing ikebana to the west. He built the Rokkaen residence for Moroto Seiroku in Kuwana a century ago. It is special in that it has a western part and a Japanese part. That's the Brit connection. The irony is that they elected to play in the Japanese half in the same week that the Nihon Ki-in has decided to allow players to use tables and chairs instead of tatami mats (if both agree). A separate room is being set aside. Several big-name players have already welcomed the move, others say they will go along with whatever their opponent wants. It won't affect the title matches for a while, I'm sure, but it will be interesting to see what sort of momentum builds up.