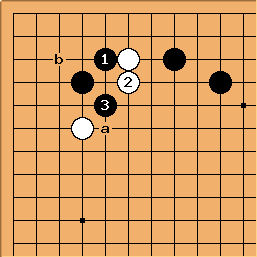 If Black wants to attack the white stone, he should prefer to stay a bit further away from it.

(separating the two white stones) or Black a (attaching against the stone one is 'not' attacking) are better ways to go about this.

Another alternative is to exchange

to reduce white's options in the corner, and then splitting. However, White still has the option of invading at b in an attempt to sacrifice her two stones at the top.[1] 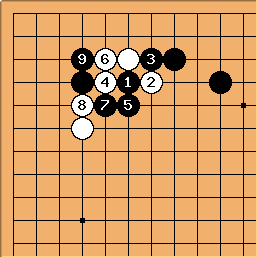 If Black does play

, go logic calls for Black to cut at

next. The resulting fight is hard for both, but more so for White, so probably White has to give way by playing

, allowing Black to play at

[1] There is a modern joseki here. 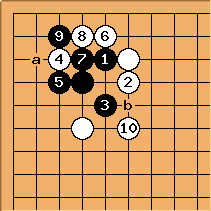 Without the black stones nearby, up to

has become a joseki (post-Ishida). I haven't seen this in a book, just the variation with

The interesting thing here, of course, is that

seems to contradict directly what is said on the parent page.

Naturally there is a reason for this, in pro play. Black most often continues by capturing at a (honte) removing a possible shortage of liberties. Then White can play at b.