Pashley If this is discussed somewhere, I cannot find it. I'm reluctant to write anything on the topic, though, since I'm only an SDK and would no doubt not do it well.

As I see it, most miai positions give ko threats. Consider this position from the Miai page. 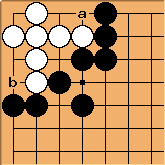 As it stands, W is alive but B can use either a or b as a ko threat.

I'm sure there are more interesting and complex examples as well.

Pashley, please do make a page about miai as ko threats. Don't worry about your strength. There are surely other people who would find such a page interesting. Stronger players can add to your work, if they wish. :)

Hi Pashley ! Although it's right that any play disturbing a situation that involved miai must have some sente value, I don't think it is useful to consider miai plays as a separate sort of threats. Personally I prefer to think in terms of threats to kill, enclose, cut, dodge the ko (local threats), simple big moves, etc.

I think it is fine to link the concepts of miai and ko threats, because many cases of miai applied in the context of life and death actually implies ko threats for the other player. To put this relationship explicitly, suppose two points are miai for the life for a white group. However, the above supposition is typically stated when white must get one of these two points in order to live, i.e., miai is a condition for life. If miai is a condition for life, then it follows that either of these two points is a ko threat for black.

Therefore, I find it useful to draw a relationship between these two concepts, provided that the context where "miai" is used is sufficiently scoped. In general, the concepts of miai and ko threats aren't equivalent, and neither is a subset of the other. It is obvious that not all ko threats are involved in miai positions. On the other hand, the term "miai", when used in contexts such as endgame, aren't typically associated with ko-threats. For example, we can consider two unrelated points that are worth two points each as miai, but we don't consider these points as ko threats for a five-point ko.

In some situations this is a large threat because cutting the joint reduces one reasonably solid group to two weak ones.