"If two gote plays have the same size (in other words, if they are miai), then their combined temperature is lower than the local temperature of either one." Can somebody explain this sentence?

Then the claim is that for the combined game, G = G1+G2, G(t) < x This presumably follows from the mathematical definitions of games, addition of games, and temperature.

The intuition for this is simply from the fact that the plays are miai. If you play one, I play the other, and vice versa. Playing in G actually doesn't change the score. So, the combined game is certainly not as interesting (urgent) as a full x point move, which is all the sentence said. However, depending on context (for instance used as a threat in a ko fight), G might not represent an even position when added to another game; so there are times we wouldn't speak of the temperature of G as zero either.

No, that's a perfectly good sentence. In this case, "generally" means well, that play isn't worth x points if it's one of a pair of miai.

I have made some small changes to the opening paragraphs, pertinent to our discussion, as it is usually easier to ask for forgiveness than permission.

That was a signed contribution. Unless you can rework the whole thing, please just add your comment afterwards.

I tend to like Bill Spight's version better than unknown hands'. It was good, and I did not imply miai pairs could be ignored in calculating the largest play, and 'largest play' is not a confusing cgt term.

It doesn't make any sense to me. Nowhere else people talk about the "temperature of a move" or of the "combined temperature of two moves", but temperature refers to the whole board or a part thereof. That the existence of a miai pair of gote moves doesn't make them mysteriously smaller than they are becomes evident, when e.g. in a ko fight you end up playing both of them.

I don't see how this affects the two gote plays in question, it doesn't make sense to talk about the combined temperature of two moves with any of the three terms imho.

These are all reasonable expressions for a first pass at explaining cg theory, imo, because they are essentially correct and allude to correct results.

The second or third pass would necessarily involve mathematical proof work. I don't see much room to alleviate confusion without returning to the definitions (there is no English language combinatorial game theory except the shorthand that is already confusing you).

Bill: This page is my attempt to explain (to some extent) some common understandings about go in terms of temperature, not as a CGT term, but as it was adopted by users of rec.games.go. There is a historical understanding of miai as pairs of plays that do not have to be played as early in the game as if there were only one of them, because they cancel out, at least in part. 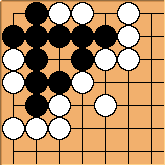 I would say it is sloppy to say the local temperature is 0. It obscures the concept. (Just imagine some more miai pairs in the position.)

If one side plays the first move in a ko, it gets instantly obvious.

Or is it that people wanted to use temperature as a guide where to play and so we came to see such niceties? I mean when we start this, why not directly say "only tedomari is worth anything"? After all sente gains nothing and all other moves cancel out as miai pairs.

The local ("considered in isolation", if you must) temperature IS 0. A play there happens to increase the temperature to 2. So, for the purposes of describing how to play, the temperature is what you make it - either way you consider it, there is an 'exception' for whether to play kikashi.

In this fine accounting logic what stops us from saying a position with a 4 point gote and a 3 point gote has a temperature of 1, or shouldn't we call this balance then?

Well, again I have used some software to calculate the proper value, as well as finally reading up on miai counting! It seems the miai value and temperature of your example are 2, which is the same as a four point gote on its own.

1 is the amount which under some conditions (the ambient temperature is less than 1.5 = "3 point gote", so the second player always takes the 3 points) the first player gains.

I see no reason in this example to confuse urgency with 4 - 3. The urgency is that of "4 point gote," which is 2 in miai value.

As long as a discussion using the word 'temperature' is self-consistent and interesting, it could be fine.

You make a little too much out of the mistake in my last post.

But while one probably can look at the miai pair as a sente play (that gains nothing but raises temperature and assumes a different count to begin with) or as two gote plays (that do not), the question remains.

Why one should start with this balancing?

What is the result if you balance this way consistently?

The only answer to question 2 I see is "Temperature equals the miai value of the biggest remaining tedomari." The concept wouldn't be of much use then.

Sorry, just stating facts while waiting in anticipation of replies to your broader questions.

Wouldn't that be, "the miai value of a tedomari is the amount temperature drops when it is played" ? Temperature is a measure that can be attached to every position, while it's hard to spot tedomari occurring every move.

"the concept wouldn't be much use": Go was played for thousands of years before the concept of temperature as such, so that's a stumper. It can be helpful to rephrase concepts and entire theories. Also, there's no guarantee English speakers have acquired the full vocabulary to talk about urgency, tedomari, etc. Combinatorial game theory has been more successful than traditional concepts, in a limited and arguably impractical way. There probably isn't an early game example where temperature reasoning trumps proverbs and traditional methods, just as there is no example that can't be solved by pure reading. Balancing is fun, develops our intuition, and has some quantitative tools and notation to fall back on.

Wouldn't that be, "the miai value of a tedomari is the amount temperature drops when it is played"? Temperature is a measure that can be attached to every position, while it's hard to spot tedomari occurring every move.

This is why I objected in the first place. After all recognising all miai pairs for balancing purposes is effectively the same as spotting tedomari. Finding the largest gote move is much easier than the largest non-paired gote move. Also you have a much smoother temperature curves when you consider miai pairs of gote plays as gote moves instead of considering them as double sente (which effectively the balancing does: whenever one move of the pair is played the temperature rises)

The concept of miai came before the concept of temperature. My purpose was to use temperature to shed some light on miai, not the other way around. You seem to be arguing against miai and then using that to indict temperature.

Well, I have no problem in understanding that a miai pair of moves is less urgent to play, I do similar operations when estimating the score e.g., I just always thought temperature is more related to the size of individual moves (blame this on the ambient temperature page), as opposed to being the balance over a region of the board / the rest of the board / the whole board.

Bill: In CGT, temperature is indeed related to the how much individual moves or sequences of moves gain. However, as adopted by regular go players on rec.games.go in the 1990s, it took on a different meaning. After all, the CGT meaning is adequately expressed in go terms as miai value. It is the new, informal meaning that go players have found useful. :)

Actually I spotted why I was so adamant about a miai pair of gote play having a constant temperature, we have an article about miai pairs of gote plays which sort of assumes the same: virtual ko threat (as they are said to prevent a loss of temperature). If there is a balancing-meaning / rgg-meaning of temperature that is quite different from the cgt-term, this should be pointed out clearly and more often and explicit wherever we talk of temperature in the library.

I now see how the balancing approach can be used to illustrate miai, without having to give actual examples. But many proverbs and examples etc. do the same without inventing terms. ("It is open on two sides, playing here is uninteresting.") For practical use I believe this term is riddled with difficulties, say in the typical endgame, the CGT term gives you a more or less smooth curve (with temporary increases during sequences/exchanges which might be many) towards lower temperature - at least it has a clear baseline, while a balance temperature might be jumping erratically at every move. But most importantly, you have to read out the (part of the) board for which you want to calculate a balance completely. If I can do this, I don't need tools like temperature for deciding endgame moves anymore.

Bill: I would be quite happy if temperature in the CGT sense were not used on SL, leaving only the sense adopted by go players in the 1990s. But a number of SL readers want to know about CGT. It is out of my hands. That leaves us with the ordinary ambiguity of language.

Honestly, I am not sure where the balancing starts and where it ends. In a position with a 10pt. gote and a 9pt. gote move, what is the temperature? Before this exchange I would have said 5 without doubting myself, but when you start balancing, why limit it to miai pairs of exactly the same value, why not balance all moves? Can't it be considered - with balancing - as a double sente of sorts? At least to me, a limit of balancing to miai pairs looks totally arbitrary, but when you start it for other moves it becomes complicated instantly (and has little relation to the CGT style miai value meaning).

Temperature in the CGT sense is implicitly used at different pages of SL anyway. E.g. virtual ko threat, which assumes a constant temperature (that doesn't drops further) but not a balance-temperature that increases after the first move of the miai pair is played.

Bill: You have to remember that temperature in the adopted sense is a heuristic. If you want absolute answers, then, as you say, read it out. Are a 10 pt. move and a 9 pt. move miai? The answer is sometimes. In Endgame Problem 24, for instance, a 2 pt. move and a 1.5 pt. move are treated as miai. That is a readable problem, but it is possible to find similar positions that are too complicated to read out, but the same heuristic would apply.

In practical terms, the temperature is the estimated size of the largest plays that you do not know the size of.