As shown in diagram "the joseki continues" (reproduce to the left)

, the joseki ends with

. That is the case in all professional games that come with SmartGo, except for one: Yamabe Toshiro - Kobayashi Koichi of 1977 (s1977-10-15ca). In that game, Black (Kobayashi) did not cover the cut until much later (

). It seems the only adverse effect for Black was that White got

in sente, which seems not that big to explain why nobody else ever tenukis. 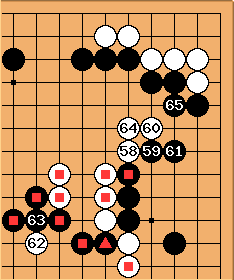 Astone (on KGS) explained to me that the black stones in the vicinity work similarly to a net; I think he called it "a net before the move". We tried something similar in a game later (

http://files.gokgs.com/games/2010/9/7/Astone-Bashan.sgf). I didn't manage to catch his stones, but at least it helped me build nice territory on either side.

There are numerous reasons to defend the cut:

About the only bad thing is it is gote. It can often be tempting to tenuki, and sometimes that is a good idea. Something to note from your pro game search is if it would be good for black to tenuki, white would probably not have played that way.

Looking at these in a bit more detail:

If you don't defend, white can cut and you cannot immediately capture the stone so a fight will develop. Note the tesuji of 3. 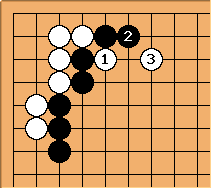 What happens next will depend on the surrounding positions. Even if white does end up sacrificing the original 1 stone black will crawl on the 2nd line a bit so white will get stones in this area in sente and thus be able to use them to sabaki and reduce black's potential here.

I note that in the pro game example you posted black already had many stones in this area so black judged he could handle the fight. 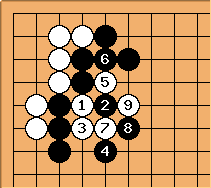 The other cut in this position is also fixed by defending the 3rd line cut with a hanging connection . 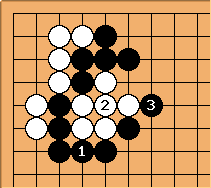 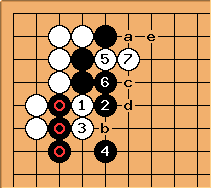 However, if black doesn't defend, then white could play something like this. (Note if black has the ladder to the lower right he can just capture in a ladder with 4 at b, but nets are better than ladders as they are local and don't give a ladder breaker). If black pulls out at a white may extend, black crawls on the 2nd line a bit and maybe white can hane and kill. Or white can answer a at c, if black answers at d then white can e to capture. If black omits d to save his 2nd line stones then white can escape at b which cuts black and a fight develops, the circled black stones are now cut and weak. 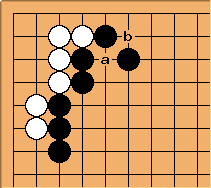 a Is almost certainly an eye, b can easily become one. 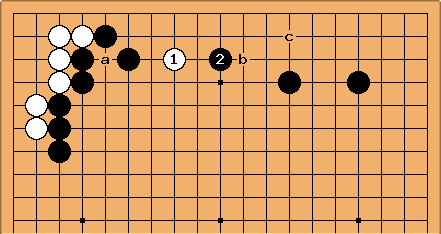 There are many ways the wall could be used for attacking, in this diagram white has invaded and black can pincer at

to push white into his wall. If he hadn't made the hanging connection then after the pincer at

. So if black answers

to make the hanging connection, white has sente to extend and make a base at b, which also threatens to slide to c. 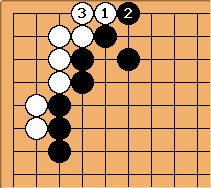 Even ignoring all the cuts, the handing connection is good for endgame (and better than the solid connection, it also makes better eyeshape than the solid) as it makes white's hane connect there gote. 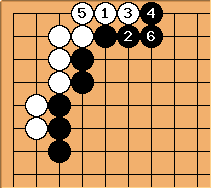 If you tenuki white gets this endgame in sente and you have 2 fewer points. 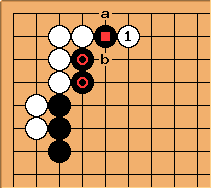 In fact white has something rather better than the 1st line hane in the last diagram, though it can be gote: the clamp tesuji of 1. Black can't descend to a or white cuts at b and either the circled on squared stones are captured. 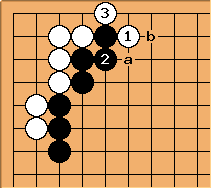 Black can play this way and take sente, but he has lost many points on the top side. a is a big point, black may actually exchange it for b before tenuki because if white plays there he then has to start worrying about eyes for his wall. 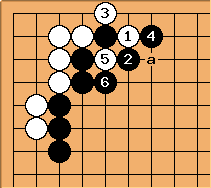 In this variation black plays 4 to keep some territory on the top. However, he takes gote to do so which means white's clamp reduced in sente which is good for white. Here white can either connect from the atari of

in sente and black defends the cut of a, or white may cut at a and fight a big ko.

Playing honte to not leave bad aji is one of those things that takes time to appreciate. The aji of the cut gives white also sorts of tactics, here is one idea: 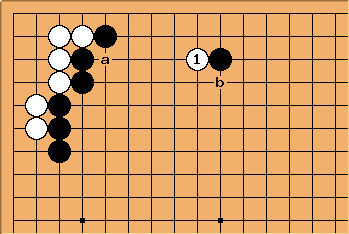 Black is trying to make some points at the top and omit defending the cut. White contacts at

. Now if black stands at b the white cut at a is severe as

will be useful in the fight. If black answers

by defending the cut, white gets to play 2 moves in a row on the side stone with b. 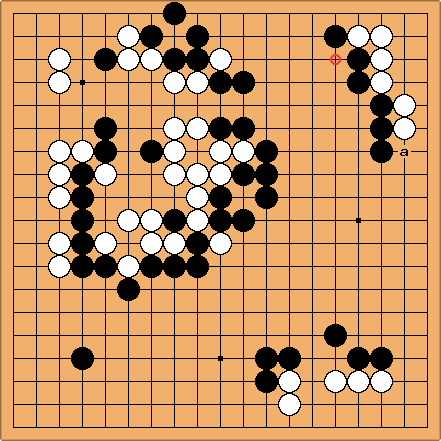 Here is an example from a real game,

http://files.gokgs.com/games/2010/8/15/artem92-duelist.sgf, of the bad aji from leaving the cut. Though in this game black was right to not defend the cut as it would be overconcentrated and sente was very important. White would like to enter the right side to stop black getting too much there. Crawling on the 2nd line at a is not so good, so artem uses the cut aji. 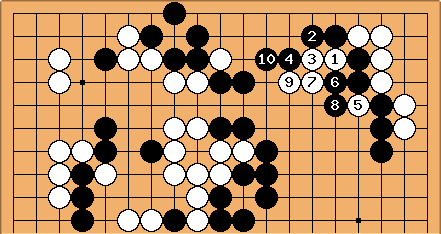 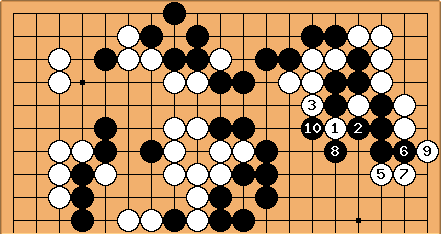 White has now entered the right side, alive as connected to the corner, on the 3rd line, in sente! However, I think black made a mistake and 2 should be at 3 to avoid the squeeze.

Thank you very much for this extensive discussion - I tossed out a brick and received a jade! I'm especially amazed that you found a real high dan example for this. In that game, it looked like Black had plenty of stones around to provide the "preexisting net", and still they weren't enough to completely neutralize the bad aji.