I've seen, many times, the assurance that the kosumitsuke against the low approach to the 4-4 point is not really a joseki, because the 3-3 invasion works even after both sides extend. Yet, amateur that I am, I'm stumped for the correct invasion sequence after 1 in the position below, particularly if black plays at a or b: 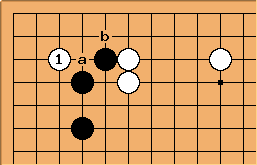 If this is solved elsewhere, please direct me. Thanks!

Bob McGuigan: This isn't a quick question unless there is a reference to a detailed exposition elsewhere on SL. There must be at least a couple of dozen variations to consider. But here is one for your Black response at a. 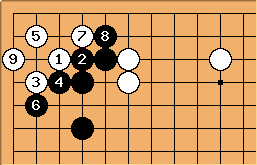 White has made life in the corner on a small scale, but the white stones to the right have been weakened. When Black plays the guzumi at

, this is intended to make things difficult for White. White can live, as shown here, but on a small scale. If there is a Black stone toward the middle of the left side, then White's small life might not be enough. Often White will not respond immediately to

but will wait and use the

stone as aji for a bigger invasion of Black's left side formation.

5k: Intermediate Level Power Builder Vol 1 has a reasonable treatment of this pattern. White's timing of the invasion has to be careful, since black will inevitably gain strength to counter-attack on the outside. In the above diagram, white seems too thin for the direct invasion. When white wants to live small in the corner though, this kind of sequence seems common: 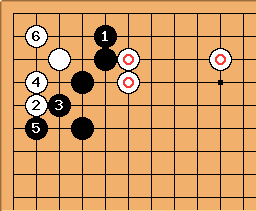 White lives, but the

position is going to be cut up and destroyed. White can also use the aji of the threat of the 3-3 invasion to reduce black and build up a position on the left.