Are the white stones in example dead or not? If not, corner stones could be played at the end of every game, to neutralize a territory. 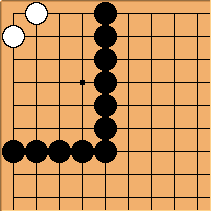 You are assuming that the opponent does not answer plays made inside her territory. However, it is true that opportunities sometimes arise (mainly through mistakes) to take away territory at the end of the game. :)

I'll assume that you mean that this position is on the board at the end of the game, when counting starts. In that case, yes, those stones are dead.

If those tones were not dead, then both black and white could still score points here, because they could try to surround as much as possible of the territory between the white corner and the black wall.

Note that I am talking "in general" here. Perhaps in your specific example, those stones could live if white played another move. Or if not, I'm sure that if you increase the area that at some point they could. If black feels that white might live, he should spend a move on it as soon as white invades.

See also: 10x10 Corner Game 1, which is about the same kind of question

Hmm ... two different answers. I'm assuming that the game ends this way. White has a territory worth one point, so the surrounding area is neutral?

If the game ends this way, it can only be because black thinks white is dead, and white agrees.

If white thinks he is alive, he should try to play in the surrounding area to increase his points.

If black thinks white is alive, he should also try to get points.

If black thinks white is not alive yet, but can live with another move, and it is his move, he should use it to kill the corner.

If white thinks white is not alive yet, but can live with another move, and it is his move, he should use it to make life in the corner.

So under any other circumstance than "both agree white is dead", the game is not finished.

Thank you so much HermanHiddema for taking your time to explain this!