Fhayashi: Yoda Note is a Japanese book published in 2003 written by Yoda Norimoto. The name sounds kind of weird until you realise 'note' in the Japanese usage is short for 'notebook'. So a better translation would be "Yoda's Notebook". My own Japanese skills are a bit limited, so some of my translations might not be spot on. Please feel free to correct.

I bought this book through Amazon's Japanese branch, mainly because it is currently the best selling go book.

The subtitle is something like "Things that you can apply immediately in your games."

The band of paper that the advertisement people put on the outside of many Japanese books says something about "100 Fuseki points from the three-time Meijin", and a quote from the author "I guarantee you'll become two stones stronger." (After reading the book, it's clear to me that this was taken out of context by a overzealous advertisement hype-meister. The statement in the text is "if you memorize these life and death patterns, I guarantee you will be two stones stronger")

The book itself doesn't have the nice high production values compared to the Segoe Tesuji Dictionary or the Fujisawa Tesuji Dictionary, but the book's contents are rather nice. It's got 100 chapters of about 4 pages each, each with around 6 diagrams. The 100 chapters are broken down into 4 sections - 1. (something like) Ways to think about fuseki in order to improve, 2. Practical in-game fuseki, 3. How to play in order to fight favorable fights, 4. Life and death in order to get 2 stones stronger.

(My translations of the 4 section headings and 4 themes are probably sketchy, though the main thrust of the idea is there, I think).

I've only gone through about 30% of the book so far, but I really like this book. Each chapter has one main idea, usually presented with two different examples. And there's quite a few practical things to try in your game dispersed throughout the book.

The writing style is kind of chatty. A typical chapter starts with something like "The nirensei opening is quite common in modern go, for both amateurs and pros. However, at the point in the diagram, I've seen amateurs mess up. Here's how to play it the pro way." Then there's stuff about a particular fuseki that was popular, and how Otake Hideo's move made the fuseki suddenly unpopular. Or how he played this particular fuseki against Fujisawa Shuko, and how this particular variant made Fujisawa's play dubious, and how Fujisawa himself taught him the move years ago, and how the great Fujisawa probably didn't remember someone such as he (Yoda).

I haven't tried to read too many Japanese go books, so take this all with a grain of salt.

Tamsin: Here is an example from Chapter Four. 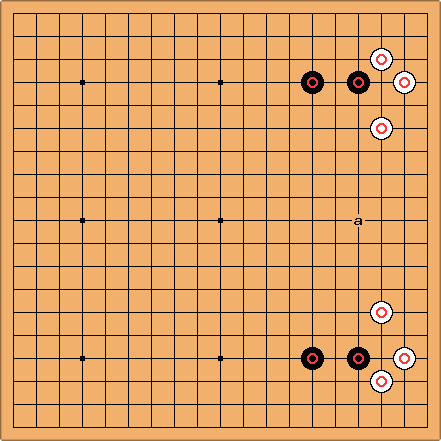 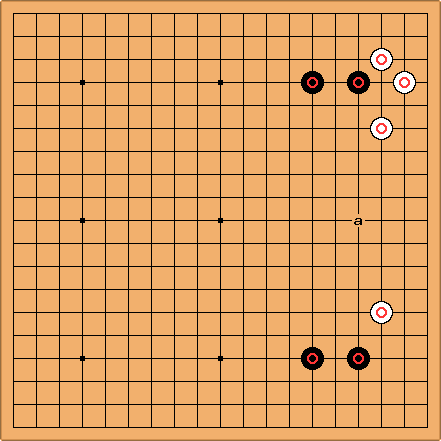 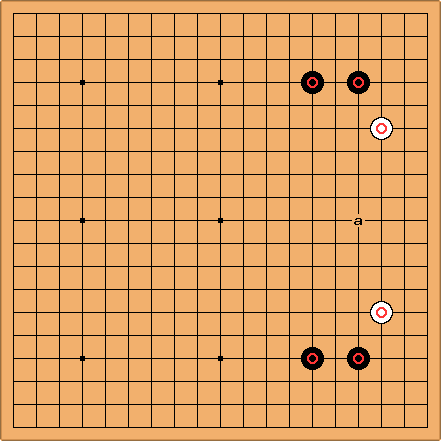 Yoda invites you to consider the value of a in each diagram. It looks the same, but actually the value is very different in each case.

In the first, White is alive in both corners. Therefore, a can only be a reducing move. If you have read Sonoda`s books, you will recall here that playing near live stones is small.

In the second, White is alive in one corner, but not in the other. Therefore, a is valuable both as a reducing move and as an attack.

However, in the third diagram, White is not alive in either corner. Therefore, a becomes a double attack, and is thus the most valuable move of the three diagrams.