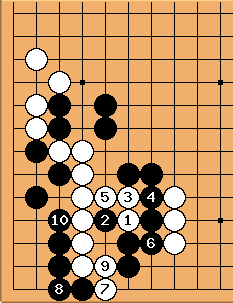 ProtoDeuteric: I think that if black connects the corner out, he will live, so my first thought is to separate it from the outside before tackling the problem of killing the corner (if possible). Even if it cannot be killed, white can make black's corner life very small. 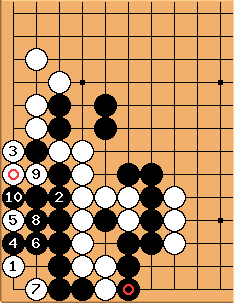 is white move 11. This looks like seki, but because white cannot approach, black has virtually unlimited liberties in the capturing race against the surrounding white group. Black just has to remember to play

so that white doesn't have an escape route. Maybe

should have been played at

so that that group had somewhere to escape and connect to from the beginning. Again, that would mean that even if black could find life, that life would be very small. 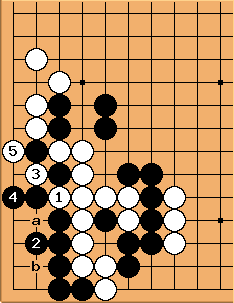 , and also black lives small. Perhaps the first sequence trying to cut black's corner off creates this situation. Maybe it is not necessary.
shevious: At White

, Black will move to

. Black is simply alive and white dead with that variation.