Vital point method simplifying the outside 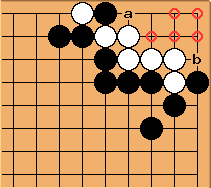 (Anyway, it often helps me, maybe others have better/easier ways of seeing this --MortenPahle)

How do you get to this shape? When I look, I find it more logical to imagine black a and white b than the other way around (black b is clearly got, black a not), which gives another bulky five with its vital point at 1-2 rather than 2-2. - Andre Engels

Bill: I think that Andre forgot to add the b to the diagram. I have added a b, based on his comment, but I could be wrong.

There is more, however. 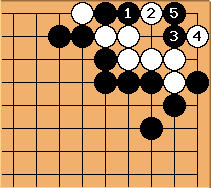 reduces White's formation to the bulky five and then plays on its key point. Since it threatens to connect, White responds with 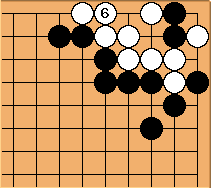 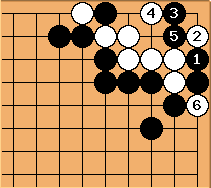 threatens to live with 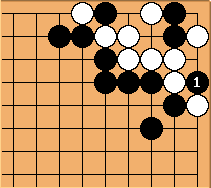 prevents a second eye, and White dies. (Not that White can live by playing first. ;-) See the L group pages.) 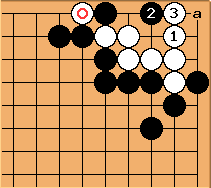 White has eyes at a and 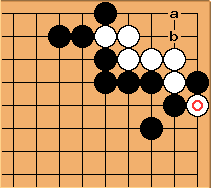 xela: Although I think the general principle stated at the top of this page can be useful, I find this particular example confusing. To me, the important feature of the first diagram is the white hane at the top. If that stone is removed and there is a hane at the right instead (

in this diagram), then the vital point is at a.

What about this as another illustration?

This reminds me of the One-Two-Three. -KenKennedy