Sacrifice shapes which lead to the under the stones tesuji.

Look out for these!

On the edge of the board:

If the three stones are captured, the one lonely stone can cause a shortage of liberties, which allows under the stones. Example:

Though very rare compared to other shapes, but it exists. An example is Under The Stones Problem 8.

After cutting by Black, a ko fight for life occurs. 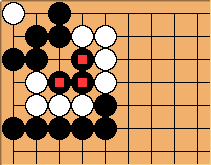 Also, a captured empty triangle can cause an under-the-stones-ish capture, but for it to work, black must remove an outside liberty after white captures. This can, however, lead to interesting connection tesujis:

Black can connect even if white captures the 3 stones.

DrStraw: Better for B to play back into the center of the 3 stones than to fill an outside liberty. The effect on B'S shape is the same, but W is not as good.

Shapes that can lead to aforementioned ones:

unkx80: Making a more general statement, I believe the sacrifice stones may be the following shapes, with the optional addition of stones in the x direction or beyond.

Bill: The only (non-nakade) example I know of is in the corner, where it is not a question of an eye, but of points.

OC, if we are going to include shapes where the question is points, there is no end. E. g., bent seventeen.

Charles The one time it actually happened to me ...

... was when I made the mistake of playing

here, thinking it was a snapback .

Bill: I think this is an example of the stupid four (

). It's the sacrificial shape, not the capturing shape, that is in question.

OC, since a nakade can be under the stones, any nakade shape might qualify. <shrug> But we don't usually think of making that shape as tesuji.