The great virtue of the two-space extension is that it is difficult to cut through. When White plays

is a simple answer to prevent White separating Black's stones by playing there himself.

It is also the correct answer, in most circumstances. But there are occasions when one wants to play

at a, b or c for reasons of local shape. It is even possible for Black to jump out at d in response; but that is when Black effectively claims that

One should bear in mind that

as shown in this diagram is in most cases honte: the other plays aren't for general use.

, at what would be a bulge point for Black.

That would be one reason for Black to play this way. Now White at a would be odd, since if White wanted that result he would have started there.

After that White has a chance to play some kikashi, with

, and then perhaps a or b. Black has made a thinner shape and White's pay-off is this chance to complicate matters.

here is an interesting example of shape, and seems only to be played in the presence of the

. White a, Black b came next in a recent Korean game: Black has cut in good shape.

This is better for White, when the white stones on the right were previously weak.

here is suitable when Black wishes to involve White in a fight. Up to

is a predictable result; White must now find a way out, or play more lightly here.

Bill: I have added

Charles Agreed, but then White at a escapes. When Black is strong locally - the cue for

- Black may connect otherwise on the left to force White to crawl out with b. 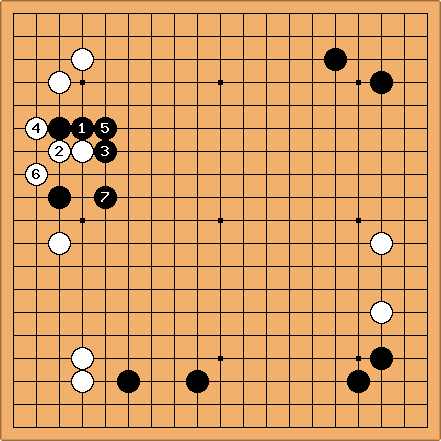 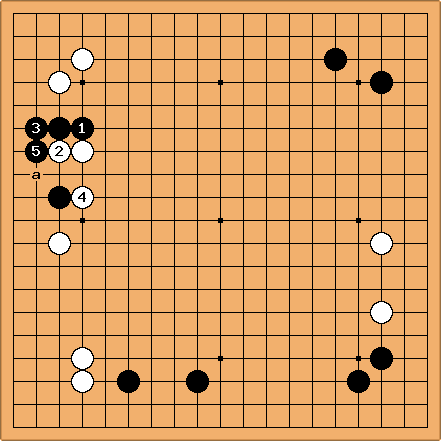 could also be at a. This is also playable.

[1] PJT: Would that be A Way of Play for the 21st Century or one not listed in our article Go Seigen? Bill: It's a set of ten volumes in Japanese, written in the last years of Go Seigen's life. PJT: Thanks