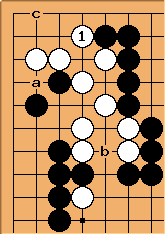 makes one eye in the upper left corner. At this point, a and b become miai for a second eye.

After reading the discussion below, it sounds more like b and c are miai for the second eye. c is the vital point for the first L+1 group. 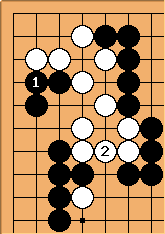 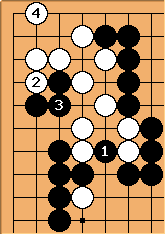 instead, then it's more complicated. White ataris at

. After that, White has the first L+1 group. White plays 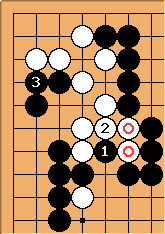 If White tries to save the two stones, Black plays

. White is left with a dead L group. It would have been better to sacrifice the two marked stones so that the whole group doesn't die. 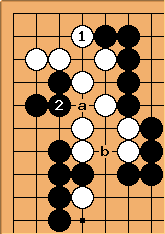 Zook: I think this is an interesting variation too. At first sight, it looks as if a and b are miai to kill the outer eye and White is still left with a L-group in the corner. However, there are weaknesses in Black's position. 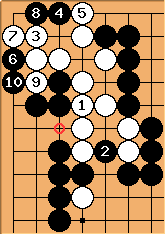 White now opens one of the variations in the L-group to make use of the weakness at the circled point.

someone: Question: what if 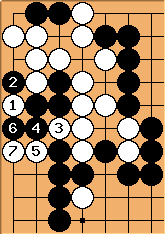 captures two stones. If Black throws in, White captures his stones by pushing through at 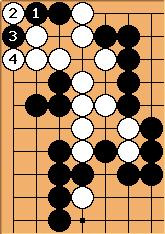 two diagrams earlier above), this is basically a variation discussed at bent four in the corner (check that page). White has enough outside liberties to avoid the ko. 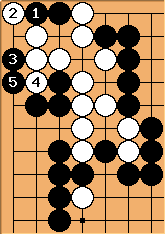 Chris Hayashida: I updated this diagram to show Zook's problem.

can be swapped, and the eye is still false. 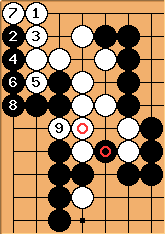 Yeah, White has to start at 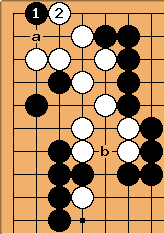 Chris Hayashida: What if Black plays at

the critical point? White cannot immediate play at b.

makes a and b become miai for life.