Stefp: Note that the tiger shape has properties completely different from the same shape rotated 45 degrees : the empty triangle.

Bill: Stefp, your comments have inspired me to create the 90 degree shapes page. Thanks. :-)

Dieter: in common parlance, shape is an invariant to rotation. It is not clear to me what you mean here.

Stefp: due to the nature of the goban grid that spells the connectivity of the stones, shape properties are indeed invariant on rotation multiple of 90 degrees. But, my very point here is that tiger shape is not invariant for rotations of 45 degrees. More generally shapes are not invariant in rotations of odd multiples of 45 degrees. And indeed tiger shape and empty triangle are different shapes. Also, considering the goban as an euclidian space, there is no possible mere 45 degree rotation of legit go shapes, there must be a scaling as well. But this is irrelevant to our discussion.

Maybe, in a sense, this so obvious to you that you don't even see that relationship between shape with so different properties So you may feel it doesn't deserve to be stated. As a (obnoxious) newcomer and a lesser player I do and it may help some other players to note that apparently related shapes have different properties. Probably I need to improve my wording, though.

Dieter: Not at all. I now understand what you meant with 45 degree rotation and I could have figured it out if had put more faith in your statement. Hence my apologies.

However I do think that no beginner (and a fortiori, no experienced player) will be tempted to extend the properties of the tiger mouth to the empty triangle or the other way around. The main reason is that oblique thinking should long be abolished in favour of straight thinking, before any shape recognition can start.

And that is in my opinion the big value of your addition: perhaps we can emphasize the abolition of oblique connectivity on a separate page, so that we can restrict invariance of shape recognition to rotations of multiples of 90°

I strongly disagree that the more experienced a player the more valuable his contributions but maybe I give that impression more than I want.

Bill: Gee, guys, in Manhattan geometry, rather than Euclidean, doesn't rotating this shape 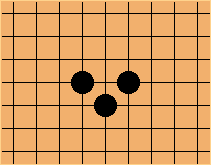 by 45 degrees yield this shape? 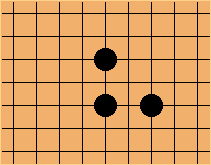 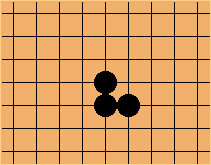 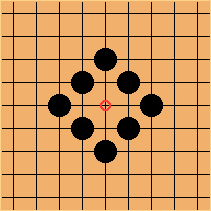 unkx80: Bill, Stefp mentioned scaling. However, while I have no objectons to the rotation part, I do not see how the scaling can be applied when it comes to Go strategy and techniques.

stefp: Indeed rotation that is not modulo 90 degree does not make much sense in a Manhattan metric because some invariants (in Euclidian space) are necessary lost. And more so because some scaling must be down to fid the rotated figure in the greed geving either the mammouth mouth or the empty triangle. I compare the distance of the points before and after rotation starting from the tiger mouth. In the mammouth mouth the distance between the center stone and one extremity stone stays two but the empty intersection distance from each the threee stones is two instead of one. In the empty triangle the distance between the center stone becomes only one while the distance from the empty intersection stay one.

That is the change of what is invariant in Euclidian geometry by a 45 degree rotation that prompted my initial remark because it affects connectivity and so shape property. I just did not state it formally enough so I did not notice the sdded necessity of scaling for fitting the rotated shape.