For those who haven't been here from the beginning: the thickness concept has given rise to a lot of discussion. The page as it is now still reflects the viewpoint of the only advocate of the idea that thickness includes influence. I was that advocate and I have been gradually walking away from the idea. Recently, I took part in a lecture by a 7 dan, who made the following interesting point: 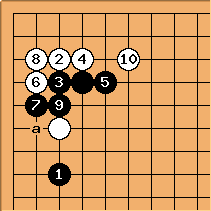 In order to understand this better, I asked the following question: 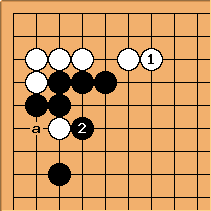 How do you judge this exchange then.

makes the Black group thick (he confirms): there is no attack at a anymore. Now it is White territory against Black influence. does this mean that with

White's territory has become much bigger ?

He answered that the exchange is favourable for White, as

Gronk: Well this is confusing. Does the above imply that any position that can be said to be certain territory (i.e., can't be killed and territory not easily reduced) can also said to be thick? Surely there must be some sense of influence in the idea of thickness. In fact, if it weren't influential, there'd be no harm in playing near it. More clarity is needed here.

Bill: Remember that thick is the opposite of thin. One kind of thickness (atsumi) does imply influence. But a terrtitory can be more or less thick or thin, without influence coming into it.

See Play away from thickness for more about the different senses of thickness. Look at John F's contribution.

Funkybside: Asking those questions was a good idea Dieter! There is a subtle point here related to exploring and understanding joseki. 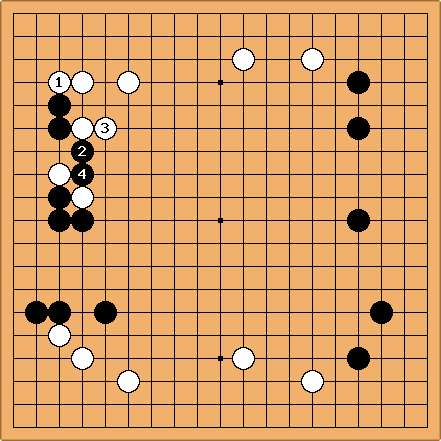 This example comes from Takemiya Style: How to Win with White.

Takemiya points out that

. Black's territory on the left side, he says, is nothing to sneeze at,[1] and in addition, it is thick.