The amazing comeback by Rafe against Kaziwami 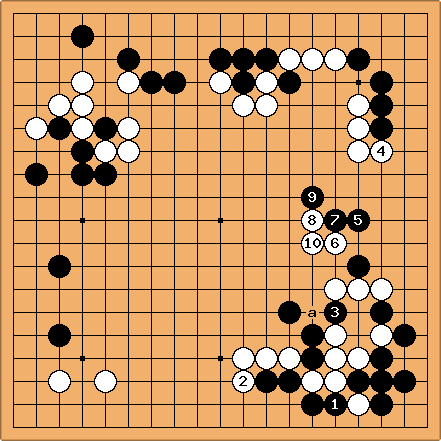 Rafe and Kaziwami are two top players on IGS. That does not keep them from playing blunders, such as

here instead of a, which allows Black to capture the cutting stones. At the level of Rafe and Kaziwami, the game would usually be over. However, what follows is an amazing display of Rafe in applying the right amount of pressure and using a ko fight to stage an upset and come back from a lost position.

In fact, Black already overplays in my opinion, by attacking with

in White's sphere of influence. 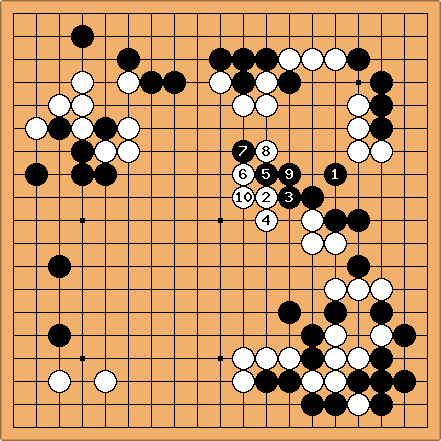 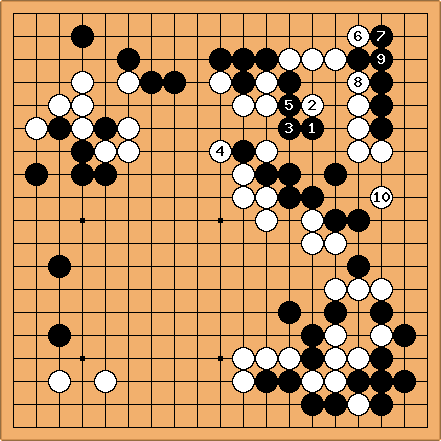 to cut off White's own group, because

can make some good shape in sente, then

attacks Black's base while expanding its own. White is in command now, despite being way behind on points. 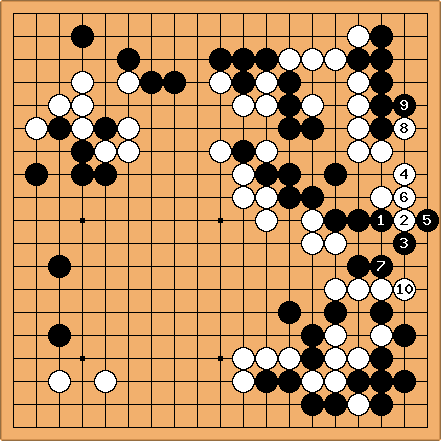 , Black is offered an easy way out: he can connect at

. I believe the upper right would at worst become a long L group which lives by 10000 year ko, especially since Black would have a thick overall position. But Black is either in a fighting spirit or careless and plays

, allowing White to cut at 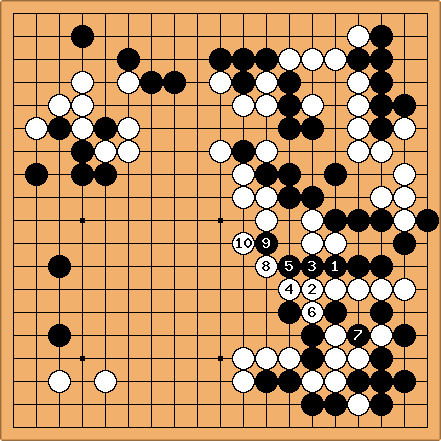 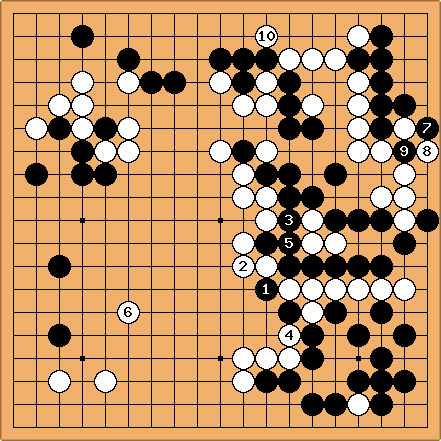 a great moyo appears. White is playing a gambit on his dragon, which is far from alive but turns out to be quite flexible. At

creates another eye space for the dragon. 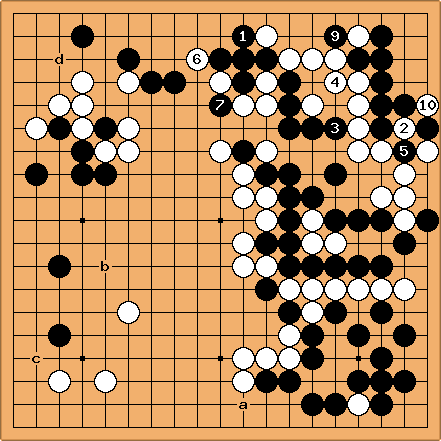 is a local ko threat. White could sacrifice the upper part and live with the large body of this group but according to me this would be gote and Black could next grab many big points a to d.

looks like an innocent little forcing move for a threat, but it will play a big role in White's turnaround.

is a first sign of a compromise: Black destroys one eyespace and leaves the ko for White to resolve. 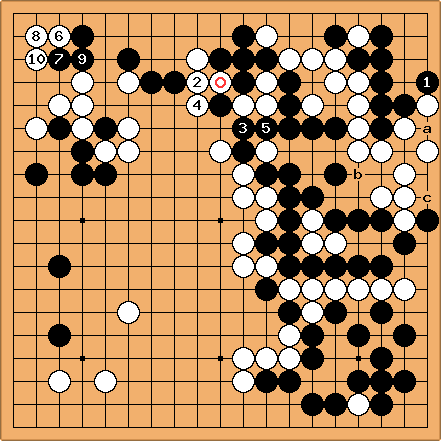 White can live with a: it looks as if Black can still harass with b but White can play c in sente (because there is a tesuji to connect without ko if Black does not answer there).

However, White senses that Black is in a low mood and utilizes the aforementioned ko threat at

to cut off Black's upper left. 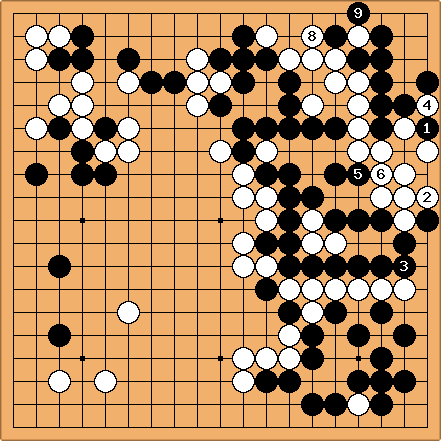 So Black reverts back to the ko with

threatens to connect (as mentioned). Now

is a real threat to White's eyes so he must respond.

shows the resilience of White's group. The ko has now become a direct ko for the life of White's dragon. 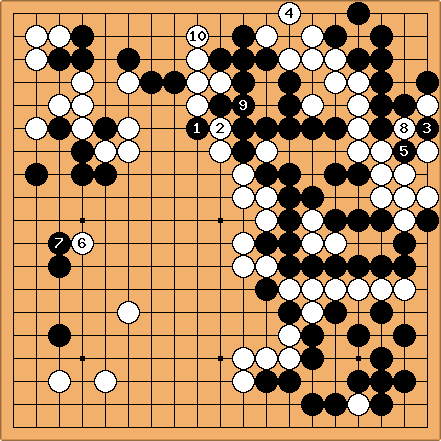 goes at the heart of the matter: if Black can capture these stones, he's still good.

creates a half eye and Black understandably turns the other shape into a half eye as well.

is the first non-local threat White uses in this fight and Black faces a major decision. I think connecting safely at

is a healthy choice: Black does not need to make the game more complex.

is a daring move that seems to unsettle Black completely. This spot was reserved for Black to connect his upper left stones. Now White uses this as a ko threat, to connect under in ko as well! 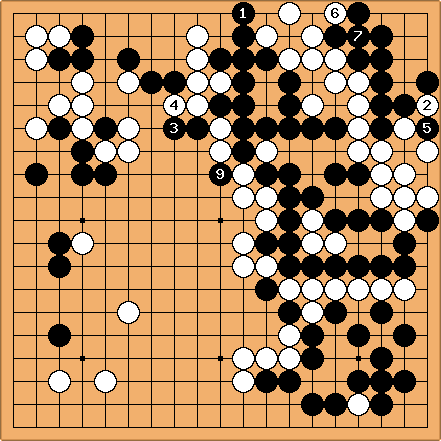 throws in for another ko and by

ignores the threat to capture mere stones and lives. 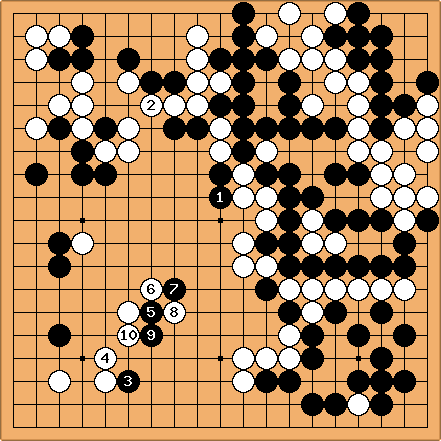 Actually, things were still not hopeless for Black. If

, I think Black will still win the capturing race. But he focuses on the useless central stones. White doesn't miss the chance and surrounds the upper left with good aji at

We haven't seen any blunders by Black, only a lack of fighting spirit and a missed opportunity here and there. Still the game is now completely reversed. White has not only kept his moyo AND made his surrounded group alive but in the process also captured the upper right corner. Surely Rafe knows how to handle a ko fight!

next invades the moyo, from which it becomes another instructive display of how to win a won game by allowing to live small and take profit elsewhere. 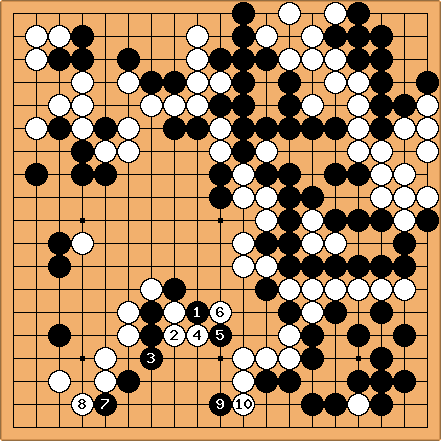 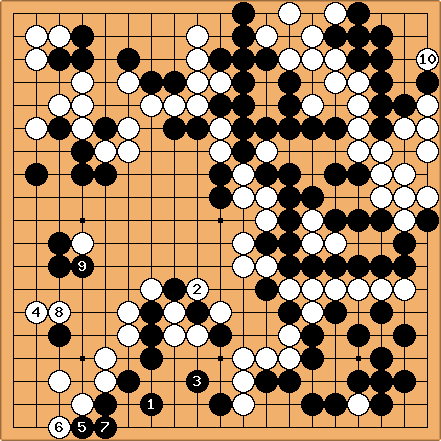 , but takes corner profit with

is a painful psychological blow: after the miserable result of the ko fight, Black sees his hard wrought profit in this area vanish even more. 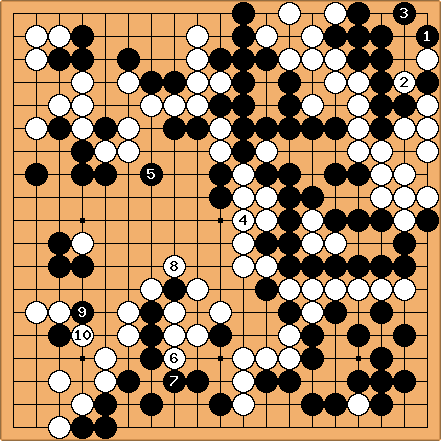 then further stabs the corpse and connects the stones which were to be the only compensation Black got for losing the ko. When

firmly confirms central thickness, the game is lost for Black. Eventually White will win by 6,5 points.