Actually, it is not fair to blame Iwamoto Kaoru, but there is a contradiction between his book and Ishida's joseki dictionary.

In Game 1 of the final, between Rin Kaiho and Ishida Yoshio, Iwamoto discusses the various possibilities in the lower left corner. After White 16, there is an exchange of 17 and 18. Iwamoto says "With 16 and 18, White builds a large moyo."

However, Ishida also takes this game as a reference in his joseki dictionary. In those diagrams, the moves 17 and 18 are already present.

On one hand, one should have faith in Ishida's capacity in remembering his own games. On the other hand, the joseki dictionary kind of focuses on the corner sequence, while Iwamoto's book is really talking about the whole game.

Dave: The analysis in the joseki dictionary starts with move 19 so naturally all stones are on the board (Ishida Volume 1, Part One, Chapter VIII, section 7, Ref. Fig. 37). No indication is given of the order of moves prior to that. There may have been some confusion because the two books present the game with different rotation. The dictionary shows the normal rotation with Black's first stone in the upper right. However, the Honinbo tournament book shows the game from Ishida's (White's) point of view, rotated 180 degrees as below. 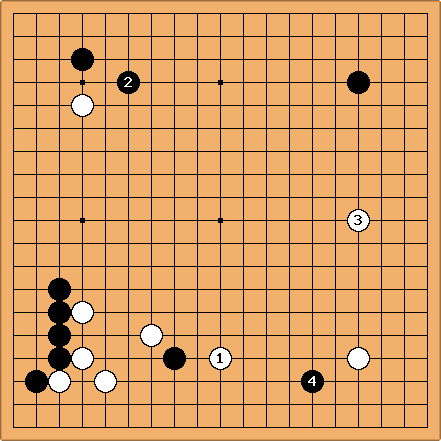 are the source of the comment in the Honinbo book but

is the start of the analysis in the dictionary. There is no contradiction between the two.

Anyway, this page seems to be unnecessary and can be deleted.