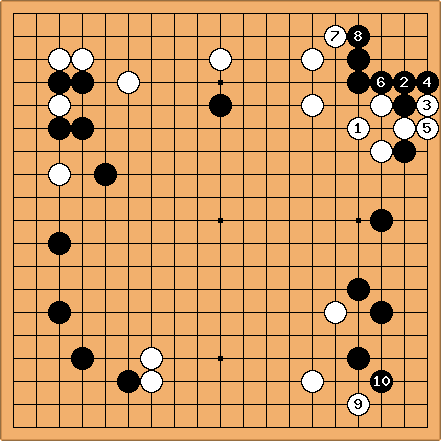 JamesA: There's only one move for White here. Black 30 is a bad mistake, and Black 28 was also a mistake - just misreads I guess! I think the game is now looking acceptable for White. (Also, see HolIgor's and my comments on Black 28 below).

Scartol: Yeah, unkx80.. I thought about that ko prospect. I guess I was just hoping (praying?) that James wouldn't fight it. Maybe he's taking pity on me for making such a stupid mistake earlier. Alas.

In any case, there can be little doubt that Black 36 is the move.

unkx80: Well, Black 34 should be played at 36. Actually, another way of playing White 35 is to play tenuki, and wait for a suitable time to fight the ko. And if White 35 played away, and Black played at 36 at some other time, Black would have used two moves to defend an area when only one move is necessary.

JamesA: I did consider the ko, but I thought I'd keep kos out of the game for now - I just wanted to take sente and make the forcing move of White 37, then play elsewhere. I thought that would be a safer way to play than the ko. Perhaps I underestimated how good the ko would have been for White....

Scartol Black 38: What can I do? I've been forced. Help, help! I'm being oppressed! 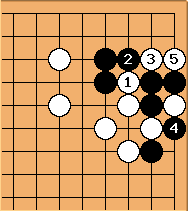 unkx80: Black 34 is very dangerous. White can actually open up a ko as in this diagram. This ko is advantageous to White as the white stones are light and the black stones are heavy. 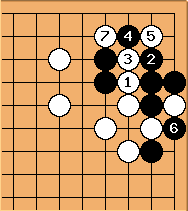 Black cannot resist at 2 either. 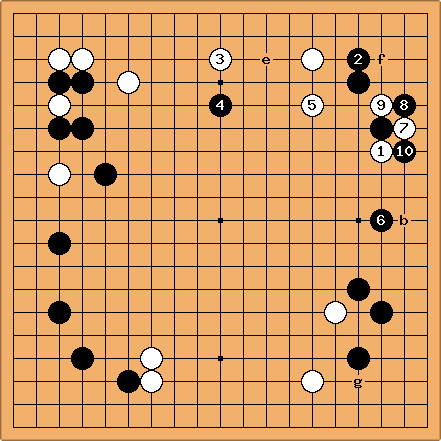 JamesA: With Black 20 I think it is very difficult for White to stay in the game with ordinary moves. I'm playing White 21 to complicate the right side now. There are lots of possible answers to this move, and it is worth spending some time reading out the possibilities to see what Black's best move is.

Scartol: Well, my first inclination is a, since it puts pressure on White 21 and threatens its life. Were I worried about a cut underneath, I suppose b is playable (if less so). c is where I would play if I thought it was most important to hane after being attached to (as the proverb goes), but if the corner were more of a concern, I'd play d. As I said, a looks best to me.

JamesA: OK, what you've outlined there seems to be along the right lines, but do try to work out which of the 'ifs' actually applies! First, does Black have to answer in the corner? To think about this, imagine what White's most severe move would be in the corner if Black does not play. Read out the continuation and see if you feel that Black can cope with playing tenuki locally.

If you feel that Black does need to make an answer in the corner, what is the best answer? At this point, don't just think about tactics in the corner. Think about what weaknesses White has elsewhere on the board, and how you would like to take advantage of them later. Aim to push White into a position where Black gets a chance to attack. Think about how much you want sente, and how difficult it will be to get it. Also, think about whether White can afford to play tenuki against an answer by Black here.

If you feel Black can play tenuki from the corner, is the right side the biggest place for Black to play? Bear in mind the places where Black is strong and the places where White is weak. Look at each weak white position and imagine Black's strongest attacking play. Which is the one you like most?

Do spend a bit of time thinking about these issues, as it will help you to find a really good move in this position. Also, it's good to get into the habit of analysing each part of the board so that you really understand what's happening.

Once you've thought about it, you should feel much more confident in your move.

Scartol: Sorry for being gone for so long. This teaching job is incredibly stressful, and I'm working nights, and my girlfriend is going away soon for a month, and lots of other madness is going on. So I don't have time to respond to everything you've asked, alas.

Basically, here's how I feel: The more I look at it, the weaker the upper right corner looks. I could pincer at e (attacking white's weakness), but then I have to worry about making that stone live. I'd rather not start another weak group right now.

So in the corner, White's most severe move appears to be f. To prevent this, playing there or at d myself seems to be a good idea. On the right: Is there a more effective alternative to a? I can't seem to find one. My setup in the lower right feels pretty strong, although some security at g is in the works.

So I think -- if left to my own devices -- my move will be d, unless you want to discuss this some more.

PS. For what it's worth, I generally prefer a less dissective approach to learning -- when I learn a math concept, for instance, I prefer to do lots and lots of problems until I get it right, rather than examining each step along the way. I appreciate your commentary -- I'm learning a lot. But I think my schedule right now would benefit from somewhat more rapid play, with perhaps some brief analysis of what I do wrong when I do it. (I use a Socratic method in my classroom as well -- trying to get the students to think about the answers themselves -- but I often enjoy being told what my sensei thinks is the right move and why.)

PPS. I think some stuff got chopped off when I moved the first group of moves. When I went to edit the page, some things were cut off in the edit window. Just for your information.

JamesA: OK, no problem. I'm pretty new to teaching so any advice from someone who does it professionally is most welcome!

Let's just play some go now then, and I'll make some comments later as appropriate. Thanks for the feedback anyway. By the way, do you study tsumego problems? I try to do about an hour a day on the tube to and from work - I think it really helps reading and might be a good approach for you.

Scartol: GEEZ! I thought it was your turn. D'oh! Sorry about that. Black 22: The corner seems to be a priority for me.

JamesA: Shame, I thought you'd resigned ;) OK - I guess I'd better defend the upper side at some point... now seems as good a time as any.

JamesA: Ouch - good move! This is just the right way to play in my opinion - it's difficult to find a good answer for White.

Scartol: Black 26: I feel like I'm abandoning Black 24 a bit, but this seems like a big move.

Hmm. Well, OK. Since it was my plan in the first place, and it seems like a good way to force myself into as much power as possible, let's play Black 30.

HolIgor: To Black 30. Ponnuki! Ponnuki! You gave him a ponnuki. That's 30 points! Horrible! Never give a ponnuki for less than 30 points of solid profit. Especially at move 30 of the game. 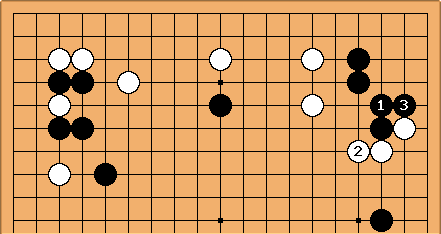 It might seem that to stop the opponent's penetration into the corner one has to put a stone just before the attacking stone. It is not so. There is an important shape rule: don't give the enemy a forcing move. I suggest simple pull back as in the diagram. Now, if White is concerned with the center (which she should be), Black's 3 is solid and Black lives easily in the corner while the possibility of splitting the white groups remains.

JamesA: I was considering either playing 2 above or as in this diagram: 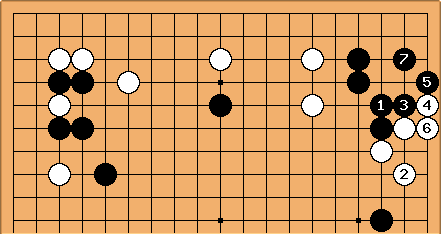 After which I thought I might play elsewhere. One concern I had is whether Black would answer White 4 and White 6 here, but I suspect he would as it threatens to steal his eyes and corner territory. 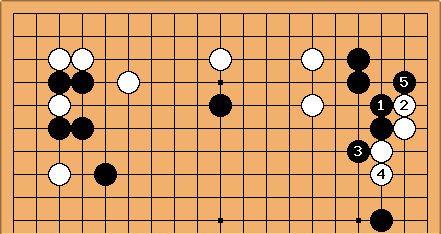 If White plays 2 then Black can press with 3 followed with 5. In this case the white groups are not connected and may need a lot of defensive moves to build life and Black's corner is more or less secure. 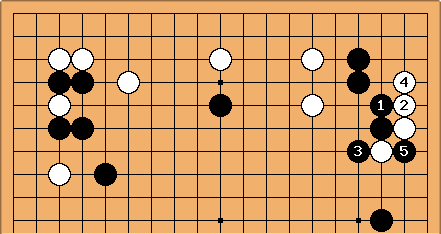 And this is a fight in which White by trying to live in the corner will necessarily strengthen Black's outside. Black will get on the side at least as much territory as in the corner, plus a good position to turn the upper side into no-man's-land.

The moral of this story is in the thick play, i.e. play that does not leave weaknesses behind, especially forcing moves for the opponent.