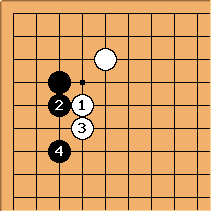 As Kageyama claims in his excellent book on fundamentals one of the basic rules of go is to get ahead and to bend first. In order to do this a weakness of the marked point is considered tolerable in the joseki.

Now, I remember I played this against a 3 dan. It was one of my early games. So, I played 4 as in the joseki book and only then started to read. 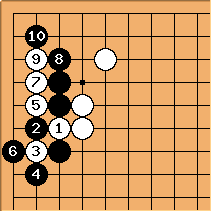 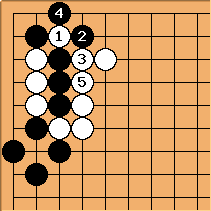 Play at 1 and Black barely wins the semeai. (You can read out that the two-stone edge-squeeze tactic here makes no actual difference.)

So, the crude cut does not work and Black is safe for the moment. But what happens if a white stone appears somewhere there? I remember sweating throughout the whole game. Not a pleasant experience.

AvatarDJFlux For what I understand, the cut is not supposed to work, it is only played for aji in order to make some kikashi possible.
White 7 in the second diagram is a mistake not worthy of a 3 dan (5 there should have been sacrificed...), and the above diagram is a very bad result for White.

HolIgor: Oh, it was not played. I just gave the variations that I had to read out in the game and sweat about possible change of the status when new stones appeared on the board. 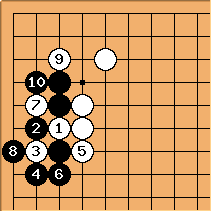 Ishida says: 9 is an efficient kikashi, but Black is satisfied with his solid position... 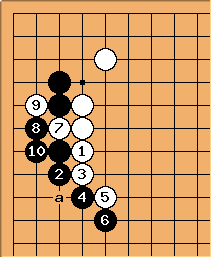 (If instead of 5 White cuts at a, we get into a scary, long and complicated variation...) 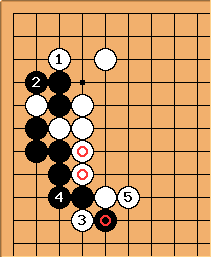 Ishida says: the marked white moves are strong, the nidanbane of the marked black move is unyielding. If White has an extension along the top she has a magnificent moyo...

Provided White plays an extension at the top Black has to make the desired turn as soon as possible. 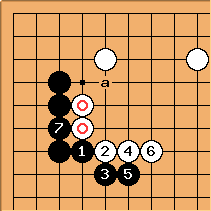 is a very cunning move.

DJ Yeah, indeed! a becomes a juicy move for later... Can anybody see the sequence there?

may be cunning, but is it sufficiently cunning to make surrendering sente worth it? Can't W simply sacrifice the marked stones as necessary?

Alex Weldon: Well, it's honte, as well as aiming at a, so it's double-purpose.