Symple, invented by Christian Freeling and Benedikt Rosenau in november 2010, features a thematical blend of 'territory' and 'dynamic connection'. It has neither cycles nor capture. It is finite and much faster than Go.

Its innovative move protocol and embedded balancing mechanism, also featured in Sygo, basically offers a player the choice to either start a new group, or grow all possible existing ones, posing a dilemma between sowing and growing.

the dilemma is far more fundamental in Symple than in Sygo because points are awarded in two ways:

Groups are orthogonally connected like-colored stones, a single one being a group by definition, and 'P' is an even number, 4 or higher. Combined with an odd boardsize (base 11 to 19 at mindsports) this means that the game cannot end in a draw.

A true strategy game offers a strategic dilemma, but few games have it thematically embedded. The move protocol implies that to grow faster, 'more groups' are required, while to reduce the penalty 'less groups' are required. Here's where the 'dynamic connection' comes in: every connection between separate groups brings at least P+1 points, but at the same time reduces growth options. This dilemma pervades Symple in every nook and cranny.

Moving in Symple is compulsory and the game ends (formally) when the board is full. It means that players may, and usually will face forced invasions in the endgame, with the implied penalties. In balanced games - the only ones of interest in this context - preparing for that phase determines much of the middle game strategy. 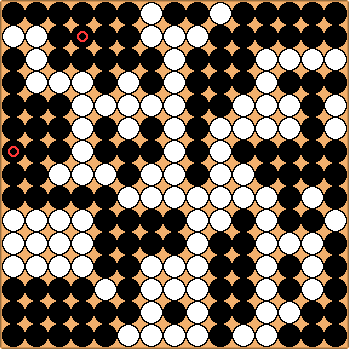 Here's the final position of a penalty-10 game between christian freeling and 'Symple_bot', a MCTS-based program by Marcel Vlastuin (running on one core of a Mac-Book Pro at 2.6 GHz). Black's final move is indicated.

Since the mindsports applet displays the actual score at any stage - which in this case would be the endscore Black 30 and White 25 - there is never any need to count during play.

White's strategy was 'connection inclined' which in the end proved his doom because it limited growth just a bit too much, eventually forcing him to invade. Black wasn't inclined at all, being a bot, but the approach clearly put more emphasis on growth. This wide range of possible strategies is one of the great challenges of Symple.

You can find this game among the example games:

Symple is played on a standard goban. There are two players, Black and White. Both have a sufficient number of stones in their color. At the start of the game the board is empty.

Moving
Moving is compulsory. White moves first after which turns alternate. On his turn a player must either:

A group consists of one stone (by definition) or two or more orthogonally connected like-colored stones. A stone connecting two or more different groups is considered to have grown all of them. A player may grow at groups as they exist at the beginning of his turn, and no such group may grow more than one stone in that particular turn.

Turn order balance
If, and only if, neither player has grown yet, then black may grow any or all of his groups followed by a single stone placement, in the same turn. 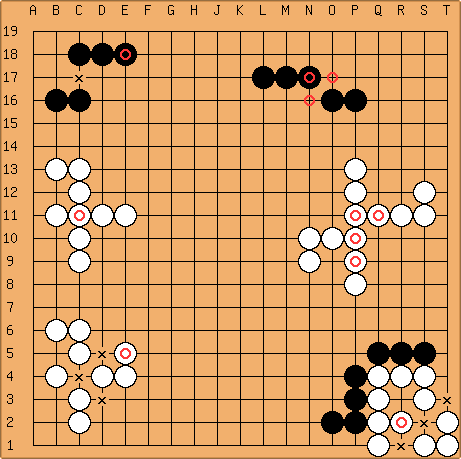 Growing
Top-left black has grown one group (the marked stone). Now he may not grow the other group at the point marked 'X', because the first group would have two new stones adjacent to it.

Top-right a similar situation, but now black may still grow the rightmost group at the points marked with a circle. He connects to an already grown group, but no group "as it existed at the beginning of the turn" grows more than one stone.

Left-center, the marked white stone connects four groups. No further stones may be added to the resulting group in this turn, and of course it now may only grow one stone at its next turns.
Bottom-left shows the same position, but now white has grown at, say, E5. This still allows growing the other three groups, but the points marked 'x' are now off limits.

Right-center white has connected four groups, using four stones. None of the original groups has grown more than one stone so this growth is legal.

Bottom-right illustrates why all possible groups must be grown: white has grown at R2 and now all liberties of the group tucked in the corner are off limits.

Note: the Symple board has coordinates A-S, that is: including I and J. Here the regular goban is used for convenience.

Object
The game ends by one player's resignation or when the board is full. The winner is now the player with the higher score. A player's score is counted as the number of stones he has placed on the board minus P points for every separate group, where P is an even number, agreed upon beforehand.

Note: This parameter is central to the theme. The applet allows P to be set at 2, 4 ... 12, because these would seem to give the most interesting play. The nature of the game's strategy changes with the choice of the parameter, because it changes the relative importance of 'connectivity' with regard to territory.