Sygo is a territory game invented by Christian Freeling in november 2010, based on the 'Symple' move protocol and othelloanian' capture. It has no cycles and is finite and much faster than Go.

The move protocol basically offers a player the choice to either start a new group, or grow any or all existing ones, posing a dilemma between sowing and growing. It also has an embedded balancing mechanism. 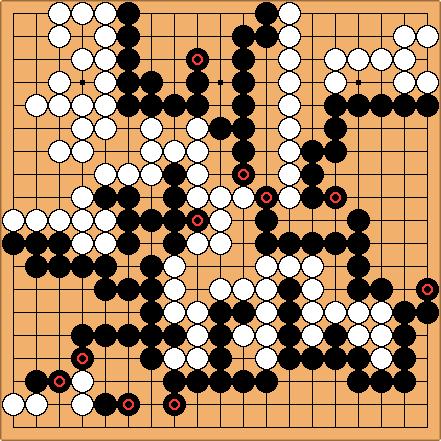 The diagram shows a position in which white resigned. Black's last move (move 21, growing all his groups by one stone) is indicated.

You can find this game among the example games:

Sygo is played on a standard goban. There are two players, Black and White. Both have a sufficient number of bi-colored stones. At the start of the game the board is empty.

Capture
The orthogonally adjacent vacant points of a group constitute its liberties. 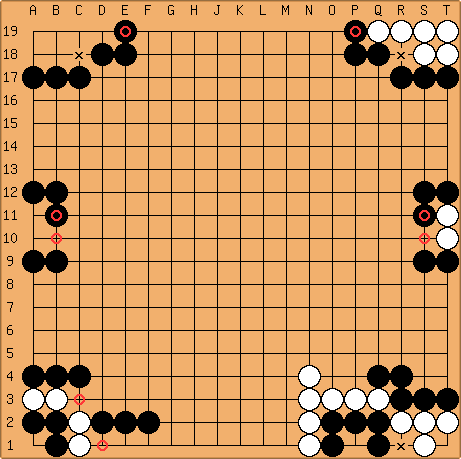 Top left black has grown at E19 and now may not grow at C18 because the original group D/E18 would had two new stones adjacent to it. For the same reason black cannot, in one turn, capture the white stones top right.

Middle left black may grow at the marked point. It is true that he thus does make contact with a group that already did grow (the marked black stone), but none of the original groups has more than one new stone adjacent to it. For the same reason black can, in one turn, capture the white stones middle right.

Bottom left white may capture at A1 and the three black men are reversed immediately. That constitutes the beginning and the end of the turn. Black may thereafter capture the eight white stones by growing at the marked points.

Bottom right is a seki of sorts: neither can grow at R1 without allowing the opponent the possibility of capturing the resulting group with a single placement. Of course the opponent may have bigger problems to deal with, requiring growth instead of placement, so growing at R1 may well serve a tactical purpose. 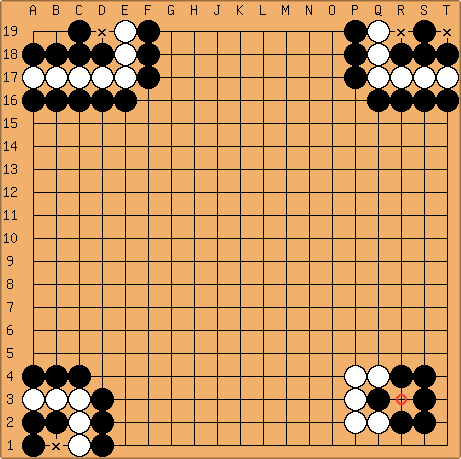 Bottom left white cannot capture by growing at the marked point, because the resulting white group would have no liberties, making the move suicidal. Bottom right shows a ko isn't possible. Even if black would have had a legitimate reason to make a placement at Q3, a capture at R3 would not open a ko but close Q3.

Note: the Sygo board has coordinates A-S, that is: including I and J. Here the regular goban is used for convenience.

Object
The game ends by one player's resignation or when players pass on successive turns. The winner is now the player with the largest terrirory, counted as stones plus surrounded vacant territory. In a seki only vacant points that are completely surrounded by one player count.
On rare occasions Sygo may end in a draw.