I'm reviewing my own games to find one mistake to learn from. Comments from others would be great, since my own analysis will be that of a beginner, but if you're playing against me please don't use this information to find my weaknesses... 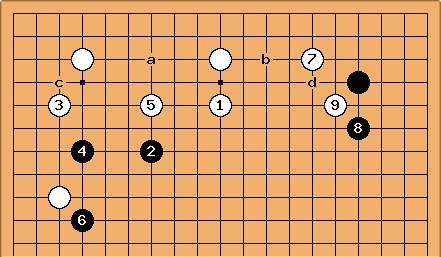 This is just painful to look at.

are completely ineffective, and the whole sequence allows white to claim pretty much the whole upper part of the board. 30 stones played and the game is already lost. I should not have allowed

, and should have tried a better strategy than "attack from afar". Perhaps a, b, or c?

at d, starting that joseki, would limit the "W has whole side" damage. The shoulder hit of

looks silly. White here is patient to proceed with

rather than attacking by pushing through.

sngrfxz: I thought the white stone at the bottom would hamper

(which is why I was thinking c instead)?

Joonas Tyystjärvi: since we don't see the whole board, it's difficult to say how black should play. However, assuming that the left side extension is relatively strong, it seems that neither a or

will give a good result for black - the resulting group will be heavy. I think the sequence here looks good enough for black - after this, white has territory but it isn't very high and black has some thickness towards the center. Of course, this sequence isn't guaranteed. 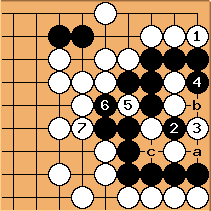 was an attempt to cleverly prevent White from forming two eyes. The mistake was in not recognizing the danger to my own groups.

Playing at a or

would have succeeded in killing White, I think. 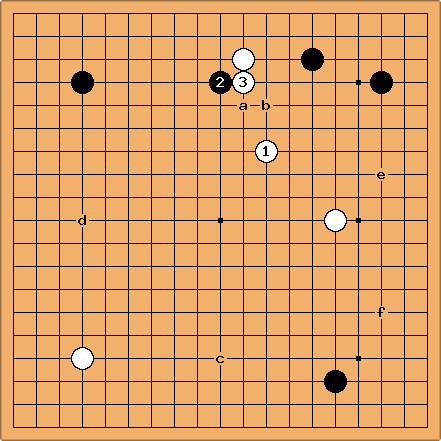 In an attempt to attack what I was seeing as an emerging wall, I give white an opportunity to reinforce his position with

. I think a or b would have been a more effective attack. Probably an attack isn't even needed at this point -- let white build a wall and continue to play along the sides instead. Maybe f is preferrable since imagining a white stone extending the proto-wall down the lower right still makes me nervous (Are white's stones too losely connected to be a source of concern?).

is just silly. The best is a, if you feel compelled to attack try b. 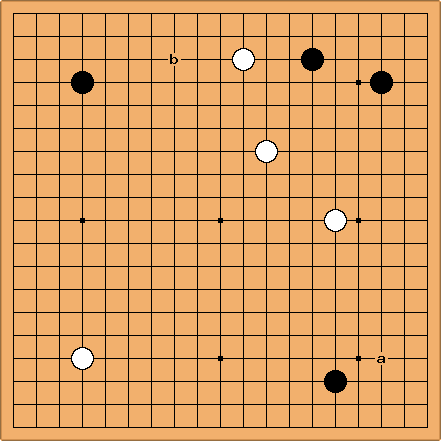 Charles An example of a premature attack. 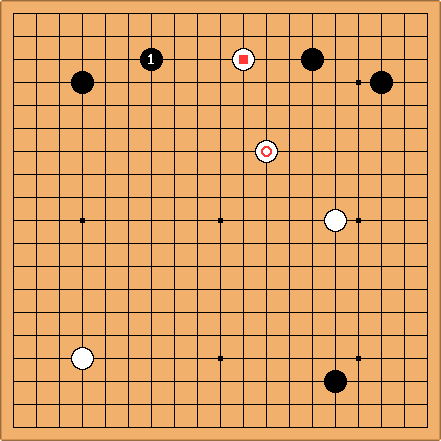 isn't a very good play, Black may feel that there should be a way to punish it immediately.

But in general one shouldn't attack without some definite aim. After

here, any future cut in the centre becomes a much better play, with

not able to make an easy base on the side.

allows the white group to escape, since white responds at a putting c7 in atari.

In some cases this might still be the right thing to do. Would the absence of the marked stone make a difference?

Note: One of my first (if not the first) games against a human.

stone does make a difference. Here White cannot play at a and then b, which would escape by serial atari? if

were absent. But note that responding to c at a can lead to problems:

White will be able to capture somewhere no matter what. Alternatives:

is a defensive move to try and find space to make eyes for the white group, while putting some pressure on the black stones. Black 10 at a should make sure Black's stones can live in the corner (see the tripod group); the other black group should find life easy.

Joonas Tyystjärvi: if the ladder works for black, black can capture the white stones with a Squeeze like this (

I don't see what Black has lost. White gets the small corner, but Black gets the nice wall.

sngrfxz:In my case the mistake was not recognizing that I was allowing white to escape, even though it may have been a good move ultimately.

Karl Knechtel: This is great for Black. The two stones are captured, the

stone may as well be (it is isolated and stuck against strong black stones) and White is left with a cutting point at a.