Here are a few kos with small values, this page lists the miai values for these kos. A similar page for small endgame moves in general is Miai Values List. This page presumes the reader is aware of Miai counting.

The ko at a has a miai value of 1/3 as can be demonstrated by comparing the following two diagrams. The net count? is 1, the local tally 3, thus the miai value is 1/3.

Taking the ko at c is sente when the temperature is between 5/3 and 2/3, as can be demonstrated by comparing the result of black responding at d against the possible results when black treats the whole region as a ko. In the latter case, the net count? is 4 and the local tally is 3, which would mean black is 4/3 worse than the "Black win" diagram. On the other hand, after white plays c and black responds at d, the local tally is 0 and black is only 2/3 worse than the "Black win" diagram. Accordingly, black playing c is a 2/3-point reverse sente.

The ko at b has a miai value of 1 as can be demonstrated by comparing the following two diagrams. The net count? is 4, the local tally 4, thus the miai value is 1.

The ko at d has a miai value of 4/3 as can be demonstrated by comparing the following two diagrams. The net count? is 4, the local tally 3, thus the miai value is 4/3.

The ko at e has a miai value of 7/5 as can be demonstrated by comparing the following two diagrams. The net count? is 7, the local tally 5, thus the miai value is 7/5. 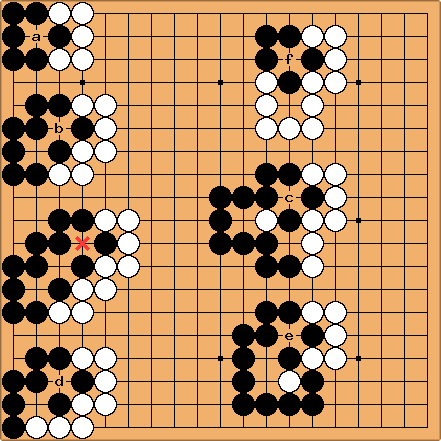 togo: c and d look like sente plays, giving same miai value 1/2. Am I missing something?

tapir: I have a at 1/3, d at 4 points in 3 moves = 4/3 miai value, and c at 6 point in 3 moves = 2 miai value. e at 7/3, f at 4/3. Also the whole argument on top of the page is plainly wrong a<b<c<d<e isn't true. b is apparently 4 point in 4 moves and the third on the left side 7 points in 5 moves. Also, imo it is misleading to talk about the miai value of sente moves, because sente gains nothing, you can calculate the corresponding reverse sente though. And if it is double sente, the method ends with division by zero and isn't applicable at all.

fractic: I believe c is somewhat more complicated. If Black plays first he gets 3 points. If White plays the position becomes the following. 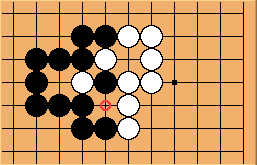 fractic: Now if Black can back away from the ko by playing

instead the local count is -3. So the miai-value of this move would be 2+2/3. This is would be higher than the proposed miai-value of the last move. Now if there was no ko involved it would show that the white move was sente. But with this ko I'm not sure.

I think that if White is komaster than his capturing the ko is sente. In this case the capture at c would be a 2/3 point sente move. If Black is komaster I'm not sure how to compute the value of this position. Maybe Bill can shed some light?

tapir: Well, this is not my strongest field but if this one is different d and e might be just as well.