To understand this page, read about liberties and eye liberties first. 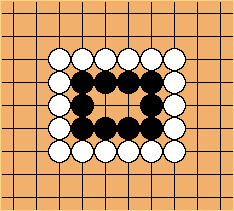 Not much discussion here, but I'll use it as the base. Each case builds on from the previous case.

Anyway, a two-space eye has 2 liberties. 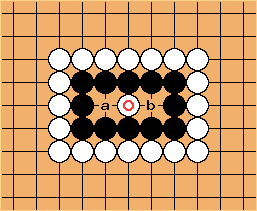 A three-space eye has three liberties. We count 1 move at the marked stone. Then White plays at a, and Black replies at b, ...

SIDE NOTE: If Black fails to reply in this case, the strategic result is the same as if Black had. But under Chinese scoring, White has one more point at the end of the game. Under Japanese scoring the points are the same too. -- Derek Grant

Bill Spight: Under either form of scoring, it is costly for Black to reply unless necessary, except after the dame stage. In that case it is costly under territory scoring but not under area scoring. 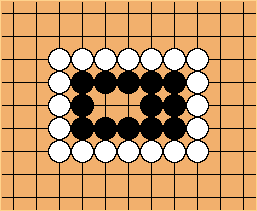 We are back to a two-space eye. Note that after playing the marked stone, Black has two liberties (the same as the two-space big eye, since White a is answered by b, so that liberty doesn't count).

1 for the first movement (white marked stone) and then 2 to fill the two-space eye remaining.

The discussion on liberties of eyes is continued on big eye liberties.