It appears that there are two open sides in a 6 or 7 stone game, and two sanrenseis. 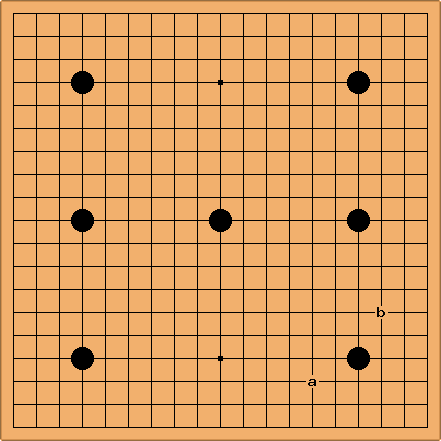 Popular plays seem to be at a or b.

Approaching on an open side 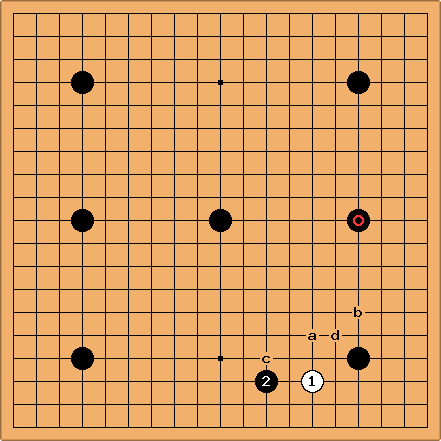 would seem to invite the 4-4 point low approach one-space low pincer. Following with the 3-3 invaision variant of this joseki would not appear to be a good move, as black gets thickness facing his marked stone. Jumping out to a would seem a better alternative.

Pashley As B here, I often play the Takemiya Kosumi at d. I find it works well in high handicap games.

Paul Clarke: The double kakari at b and the contact move at c are also interesting. 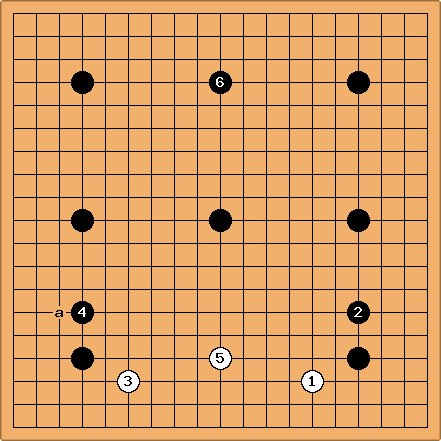 If the pincer isn't played, white might try this sequence, but black can cause trouble by playing

, in which case white will probably make a double approach at a or

In the shown sequence black comes away with sente, and

would seem to be a good way to play next.

. I think Black should respond by just playing at

in the diagram, but often Black will play something defensive at the top and give White sente to take the point of

Lambic An interesting strategy for Black is to force white to turn his construction into real territory as shown below. 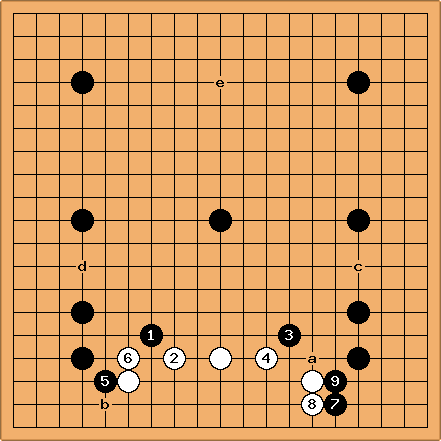 1 and 3 strengthen the center slightly and can be useful if white decides to invade one of the sides. 5 is sente and aims at 'b'. 7 and 9 take the corner and aim at 'a' which is practically sente for black. If white plays 'a' now, black can play at 'b'. The conclusion is that white has some 20 points of territory but did nothing to help him fight on the rest on the board, in contrast to black. Moreover this strategy doesn't involve fighting and keeps all of black's groups safe, which is certainly prudent in 6/7 stone handicap.

Bill: If White is kind enough to play

, then Black has guarded against invasions at or around c and d with sente. Black can now play

at e with a glad heart. 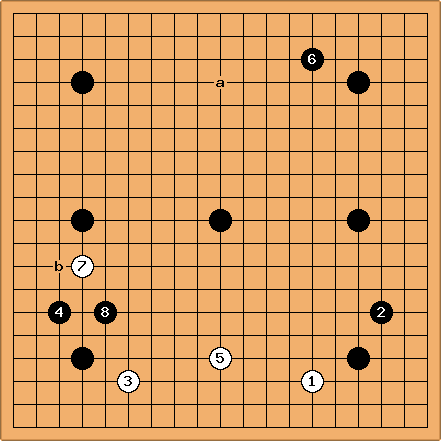 Bill: There are many ways to play a 6 or 7 stone game. One rule of thumb is for Black to play 30% aggressively. Another is to reduce possibilities for White.

may look passive, but they reduce possibilities for White on the sides.

may look smaller than a, but it gives White fewer options on the top side.

It is important to play solidly rather than passively. A play at b would be a passive reply to

off and looks toward an invasion of White's bottom framework.

Black can begin solidly in a high handicap game, which will force White to play thinly. Then Black can attack or invade White's thin positions. 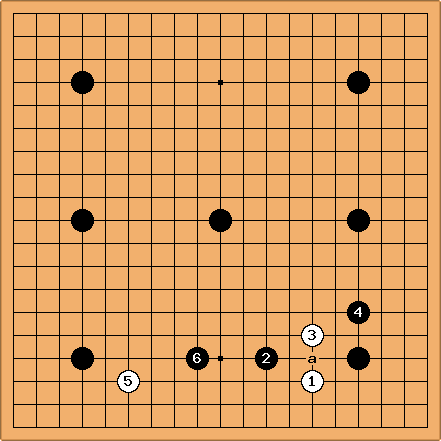 I like the one space high pincer. For one thing, it is severe. Also, White has fewer ways to play against it than other pincers. If White invades the corner, Black can easily make a solid wall. If White plays a double kakari, Ba is good.

is good play, but for White simply to settle the bottom right now would be slow. If now

Approaching on a closed side 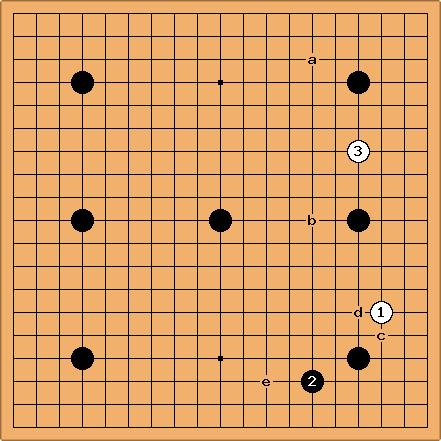 If black protects at

, then white can make another approach at

, and can potentially make a double approach at a, or aim at capping at b. If black plays c before

, then white can extend to d and play as in a nine stone game.

NB: Because the bottom side is open

is played a line lower to protect against an approach at e (this is a matter of preference).