Just a related question: I remember having read that one set of rules actually split the points in a seki depending on which player has the most stones surrounding the 'eye' or shared liberty... ?

This was true in some older versions of the Ing rules. In current Ing rules, all empty points bordering both colours are shared 1/2-1/2, but in the oldest versions it was indeed shared based on the number of stones of the two colours surrounding them. - Andre Engels

Another example of seki with eyes (well, sort of) which has come up in my games a couple of times is given here. Although White has no real eyes,[1] White is still alive in seki. At least once, after a throw-in to reduce Black's eye to 1 point, this shape won the game for me. 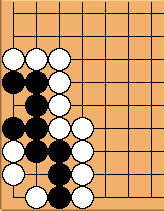 Robert Pauli: Well, Bill, to be consistent the following should look like two eyes to you: :-))

However, by the definition I had in mind, these are *not* real eyes, whereas the eye in the above example is.

A basic real eye is a single empty point adjacent on all sides to stones of one color such that none of the adjacent stones may be captured without capturing all of them. (Alternating play is *not* assumed.)

Robert Pauli: I see, but then look at this, Bill:

The eye in the mid wouldn't be false, but I just feel it is. I have something like this in mind:

If, after filling all other eyes, the eye in question is
not surrounded by a single connected group of stones,
it is false.

However, then I'll have to accept that infinitely many false eyes can make life ;-):

At the end we get the nice property that in a finite living shape (in the narrow sense: only 1-point eyes in it and all stones in it contacting at least two of them) all false eyes can safely be filled.

Bill: Quick response. I like your definition, except for the fact that it identifies the eye in the first case above as false. You should not get a seki in which, in the final position, one side has a full eye and one side has a false eye. (Except, I think, for some Ing disturbing kos.)

It looks to me like adding the local shape requirement works. I. e., in addition, at least half of the diagonally adjacent points must be occupied by the opponent's stones.

unkx80: How about Two-Headed Dragon? Looks like the discussion here can be moved to Formal Definitions of Eye soon.

Bill: Robert's definition takes care of the Two-headed Dragon, because if one of the eyes is filled, the other is surrounded by a single connected group of stones. So neither is a false eye. :-)

unkx80: Ah, now I understand. I failed to understand his definition the first time round. =)