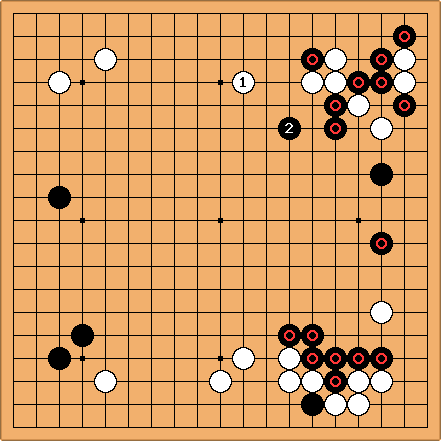 is considered too thin. Black played

and since White could not allow Black to build on such a scale, Sakata had to play tenuki.

In the following fight all marked black stones (and

, too) died. However, this was all part of Takagawa's grand-scale furikawari strategy. Black won by resignation.

Before the game Sakata was considered the favourite. The game was won by Takagawa though, who went on to win the title and held it for many years.

After exchanges, Black secured a huge territory in the left half.

What is the status of the white group in the left bottom corner? Can White survive?

Dave Sigaty: It seems to me that

are what happens if Black wants to try to capture White. The play at

seems to make miai of a and b. Basically at this point Black is ahead by at least 20 points on the board and so the game ends :-)

Interestingly, this game features Crab Eyes during the opening.