Rectangular Six In The Corner/ Discussion 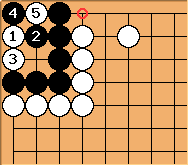 The main page says white wins the ko by connecting at 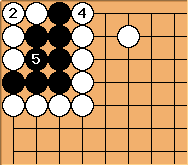 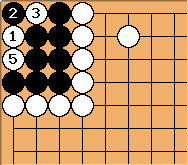 It takes white four moves to capture the black group. Let's consider the alternative of playing at 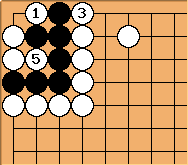 Here it takes white only three moves to win the ko.

Bill: This is tricky, and depends upon the ko threat situation. If Black is komaster, White should not make ko to start with (as a rule), but threaten to kill with sente. 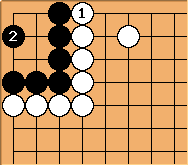 If White correctly makes the ko, the tricky position is here. 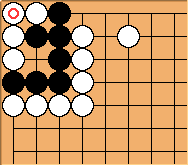 White has just played at

. If Black now captures White's four stones, White throws in again and White must make one extra play to win the ko.

Truc's point is that if Black waits, eventually White must play atari and make two extra plays to win the ko. And therefore White should not fill at

, but play atari instead.

However, that analysis fails to take into account when those plays are made, -- IOW, the ko exchange.[1] Normally White will make the ko when the ambient temperature is 5.5 points. If Black captures the four stones right away and loses the ko, he will get to play a 5.5 point play in exchange for the ko. But if Black waits, White can wait too. If White waits until the dame stage to start the ko, Black gets only two dame in exchange for the ko. Even though it costs White one point of territory to make the second extra play, Black does better, as a rule, to take White's stones right away.

(OC, there will be situations where Black should not take the stones right away, but they are rare.)

Bill: De nada. :-) Thanks for bringing this to my attention. It is a great example of something the pros learn, but do not write about. I have never seen anything in the go literature about playing to lose a ko early.

[1] Also, under current (1989) Japanese rules, at the end of the game the Black stones are dead, and may be removed without capture. Typically, the equivalent is true under area scoring.