Most of the world uses the Japanese system of kyu and dan ranks for amateur players. The Korean term for kyu is gup (Hangul: 급, Hanja?: 級, RR: geup, M-R: kŭp). Like kyu ranks, gup ranks starts with beginning players around 30 gup (note below). Rank decreases as a player gets stronger - stronger players have a lower gup, with 1 gup being the strongest of all.[1]

Traditionally, the dan ranks in Korea were reserved for professionals. Because of this the strongest amateur players in Korea had the rank of 1 gup. When compared to other ranking systems, 1 gup in Korea was equivalent to amateur dan ranks in the rest of the world (5-7 dan).

Recently, the Hankuk Kiwon introduced amateur dan ranks, from 1 dan to 7 dan, making their system more like that of the rest of the world.

After the popularisation of the Internet, there are three different ranking systems used in Korea, which makes the matter even more complicated.

The Dan-System of the Hankuk Kiwon is equivalent to the Dan system in Europe, with some exceptions.

7-Dan - per definition, these are players who can play on Black against professional players. You must win three(!) national amateur tournaments in Korea. Because of the strong amateurs in Korea, this task is far from easy. Actually, there are more 9p player than 7d amateurs...

6-Dan - per definition, 6d can play the professionals with two stones. You have to win one national amateur tournament in Korea. This is, of course, not quite easy, either... But if you are "reasonably" strong, you can buy the 6d diploma from the Hankuk Kiwon.

5-Dan - becoming 5dan is "quite easy." A 5dan means that you can hold your own against a professional with 3 stones. There must be about 10.000 people in Korea who can manage that. But there are a lot of really strong people who still play "5dan" because they could not win a national amateur tournament...

There are two ways to get your Dan diploma. You can play with a professional with an appropriate handicap. Then she or he assesses your strength and gives you a diploma. Or you can solve the Quiz in the magazine of the Hankuk-Kiwon. There are quite difficult to solve, and if you really do it right a couple of times, I guess you deserve a 5d-Diploma. I already described how to get a 6d or a 7d diploma.

Korean Kiwons(clubs) are privately owned and managed. The owner-manager sits there every day, collecting fees from (most elderly) guys who want to play. This fee is usually about 3000-5000Won per day.(3-5$). Anybody who is interested can open a Kiwon.

The strongest rank in a kiwon is 1kyu. The "ordinary" first kyus would need about 3-4 stones against professional players (4-5 dan strength in Europe). Of course, some first kyus can have near professional strength as well.

Interestingly, there is nothing like a "2-kyu" in Korea. Either you are a "strong" 3kyu, or you are a "weak" first kyus, whatever that means.

As I already mentioned, the clubs are privately owned. As there are thousands of clubs all over the country, there is no way that the ranking system can be held consistent in all clubs. A five kyu in Kiwon xx can be a 3-kyu in Kiwon YY and vice versa.

2017 Update to the above: I talked to the owner of my local kiwon, he confirmed the above information is still accurate today. He said you will never find people saying their ranks are certain specific numbers, like "2-gup" mentioned above. I'm not sure if this is for pride or betting reasons, or something else. I am 2-4k on KGS and have a 50-50 record against "6-gup" players in the kiwon. I believe I'm 5-gup or 6-gup in kiwon.

The most established web-sites for playing Go are Tygem and Cyber-Oro. (www.tygem.com and www.cyberoro.com, respectively.)

The highest Tygem ranking is 9dan. I have never seen any "mortal" reaching 9dan. You must be a professional or a yeonguseng (insei) to reach 9dan. There are a lot of professionals around. Usually, if young people meet to play Go (offline), they ask each other: "How strong are you?" "I am Tygem 5dan."

The highest Cyberoro-ranking is 8dan. Cyberoro tries to use a similar ranking system to the Hankuk-Kiwon. Therefore, a Oro-3dan is approximately a Hankuk-Kiwon 3dan. Understood everything? :-)

I have heard that a Korean 1 Gup can be anything between 2 Dan and 7 Dan European/Asian and that 2 Gup is equivalent to 2k-1D. In the lower ranges, gup and kyu are approximately equivalent, but because Koreans don't have Dan grades, ranks don't go up quite as linearly as European/Asian. What is linear anyway: my experience is that handicap is not additive at all.

This is word having reached me and it can as well be myth.

Note: I believe in Korea they do not keep track of rankings until 18 gup. Hence there is "no such rank" as 19 gup, or 30 gup for that matter.

Korean do give (sell) "official" amateur dan diplomas. Of course, you must be really strong (or rich ;-) to get it. One way is to pay to take a test (a handi game against a pro). I forget the pricing and the handicap but it gets more and more expensive as you progress up.

Alex Weldon: I think the Gup system has changed to be the same as kyu, or close to it. Everyone I've talked to here says that after 1 Gup, you become 1 dan (amateur). So 1 Gup is no longer the same as 2-7 dan.

JanRamon As far as I know, a Korean would say he's 2 gup if he is "strong" and 1 gup if he is "very strong" (professional level). They usually only use dan levels for professionals (or indeed for diplomas that give more an impression of your wealth than your skill). Therefore I was advised to emphasize the "amateur" in my "amateur 2 dan amateur" level when I went to Korea. And indeed, a Korean 1 gup can give me several stones. But as the hosts made a good attempt to translate everything for us, I don't know for sure how exactly the system works. The Dashn Baduk server uses kyu and dan grades, quite equivalent to european ratings I think.

Alex Weldon: I'm still confused, actually. As I said, a Korean with excellent English (so there was no misunderstanding) said that after 1 Gup, there are amateur dan levels 1-7 before the professional ranks. This is held up by the fact that when I went to a kiwon? several months ago I was tested by a guy who said he was "amateur 6 dan." (in retrospect, I should have actually asked what my rank was... instead, he just came by and said how many handicap stones were appropriate whenever I played a game with someone else).

Also, a guy I play with regularly, and can now beat giving 2 stones handicap, told me last night that he'd say I'm 6 Gup, since he used to be 7 Gup, but is a little bit out of practice. Since I'm around 11k* IGS, there's no way that's true if 6 Gup is really in the low single-digit kyus.

On the other hand, when a student asked me what Gup I was, and I told her that someone told me I was 6 Gup, she gasped and said that was stronger than her teacher. So I don't know.

Charles Matthews It seems that in South Korea dan ranks comparable to international ideas of strong amateur levels (a little stronger than EGF, though) are being introduced gradually, but from the top down. Korean 7 dan represents the top group of amateurs no more than a stone from pros, Korean 6 dan is for winners of a national event. These are elite groups; Korean 5 dan is for the top 10000 nationally, and Korean 4 dan (I've met one recently) is close to EGF 5 dan, anyway EGF 4.5 dan. These ranks fill out in some way the space caused by 2 gup being traditionally a broad level (would cover a high proportion of good to strong European amateurs), since 1 gup has a special meaning. It is probably still not the case that one can consolidate all grade information there easily. (The same could be said for Japan, too, but there the effect is somewhat better hidden.)

Tamsin: I played at the Korean-run baduk club in Flushing, NYC earlier this year. I am comfortably 1 kyu in the UK, but 8 gup in that club was too hot for me that day. It was all the more embarrassing because when I first arrived and said I was 1 kyu at home, they thought I meant that I was 1 gup. This lead to me giving a rather stronger player than me a handicap game, which took a lamentable (now laughable) course. In any case, those Korean players in Flushing were the toughest opponents I have ever run into.

[1] The kyu - dan system in Japan is at first sight more confusing. It starts with the weakest players ranked around 30 kyu, and goes down as the players get stronger, with 1 kyu in Japan being a reasonably strong player (similar to about 7 or 6 gup); then it starts over with the dan ranks. 1 dan is the first step after 1 kyu, and the dan ranks go up to 7 in most places. 7-dan amateur players are the people who win the World Amateur Go Championship, for example.

Korean Go instructors don't like to give out dan rankings, unless the student is very talented. However online Korean server rankings tend to be more inflated than "regular" ranks

Here is a problem for a Korean 5k student: 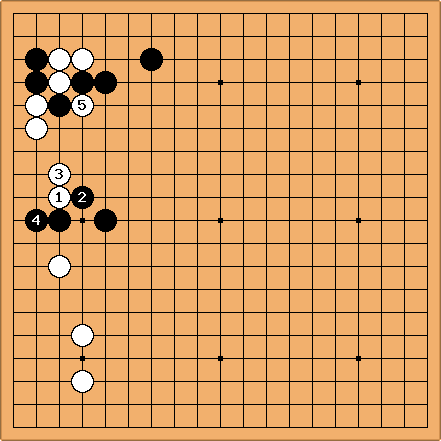 S_Cho: There are two different ranking systems for amateurs in Korea. One is official HankukKiwon system, which goes from 18 gup to 7 dan. The other is used in typical go salons, which goes from 18 gup to 1 gup. (Maybe they think there is no such thing as "dan" player in amateur level.) Roughly speaking, 4~5 gup in "go salon" system corresponds to 1 dan in the HankukKiwon system, and "typical" 1 gup in "go salon" system corresponds to 4 dan. But, since there is no higher rank, there are strong 1 gup ("kang 1 gup") players corresponding to 5 dan ~ 7 dan. More confusing thing is, if a go salon have some strong 1 gup members, 3 gup player at the go salon (since s/he gets 2 stone handicap to 1 gup players) may be as strong as 1~2 gup players in another go salon.

nachtrabe: It should probably be emphasized, since there seems to be some confusion among a lot of people, that "gup" is just the Korean equivalent for the word "kyu"--I can say that I'm a "4 kup" in Hapki Do and it is equivalent to saying that I "4 kyu" if it were a Japanese martial art.