Well, last game. I lost. But I felt great while playing, so there aren't complains. Let's wait till my sensei starts critizicing it, but... By now, I ended the tournament with 3 wins an 3 losses, and a rank of 17k?. I'm tired of that damn "?". In two weeks I'll sent it to hell.

Next week has come again (as it does every week...) and I won again. Not really happy about it. I told my opponent that I had to go in half an hour, and we could resume it tomorrow. He said that was long enough to play 4 games, and I told him that I couldn't. Well, he started playing very quickly and I took my time. I'm not really slow, I think. Well, he made a "invasion", just put a few stones near my early thikness, and I took a while of time, thinking, and crushed those stones. He said me that if he had knew, (that I would think so long) he would have taken more time on it. I ignored it, and keep playing at my own pace. I was winning by about 30 points, and made a good (I think) endgame move that he didn't saw, about 10 points more. Well, he didn't resign, neither pass. He started playing in his own territory, suiciding himself. He said that he wanted me to be as bored as he had been. I made about 50 or 60 passes. What do you think sensei's? Well now I'm 16k? on KGS, but feel as if I had cheated for doing that. Hope I'll win next one and feel again that I'm doing my best against anyone. (I won by 397.5).

Velobici: Well, different people behave in different ways. Sounds like this person is someone that you might not want to play with from here out. You can censor this person on KGS, if you wish to go that far. Then they will not be able to bother you in this way again (at least with that account name).

There's no need to go that far, I'll just don't play him again.

Next week has come, and I won my 4th game yesterday, against an 24k? giving 2 stones (by 104.5... maybe the handicap was too short, but that was not my fault). But I think I didn't play too well. Hope I'll win next week too, so I'll have 3 wins out of 5 games (6 games to be played, recording 50% is good enough for me). I'm plannig buying Lessons in the Fundamentals of Go and Life and Death, but still don't know which to buy first. Any suggestions?

First game of the

"2nd spanish tournament in KGS with handicap" against Nestor, 17k KGS. I lost, both sides made mistakes, but mines were greater and his abilities greater. It was a good game anyway, I didn't feel bad after losing it. Hope I'll win the next.

Two wins in a row, one free and one rated. Maybe I'm improving? Still don't know, just training myself a little. "Only time will tell..." (as Poison said)

I have'nt done much that I wanted, only going on and on in life and death problems and two games played only. One was a big loss, maybe the worst game I've played ever, at least is what I think. The other I win by 14.5 moku by a mistake of my opponent, but I was still ahead by 1.5 moku. But I didn't know that while I was playing and just tried to get some more points.

In two weeks I'll be playing the

"2nd spanish tournament in KGS with handicap" and I shall play a lot more and concentrate if I don't want to be the worst player. And maybe I could win the tournament and buy Invincible because the prize is 30 Euro (about 30 US Dollars) and the book costs 26. Well, as Guns N' Roses said, "so what'll happen to us baby, just we'll have to wait and see". I have the only goal of winning a single game. And if I can, one and next another till the end.

19th August 2003: I lost the 2 last games, making 2 wins and 3 losses. I was the 6th out of 10 players. Not too bad, I won the 5th and lost against the 1st, 2nd and 4th. The first was against an 11k with 9 handicap, and I lost by 6.5 moku with 0.5 komi... quite close. After that, my opponent said that it was a great game (as everybody does to everybody) and told me that I play very well in defense, and have a good attack (because I told him that I lack attacking skills) but my problem is the pace, when to attack and when to defense. Here's the diagram of one position, taken from a picture someone took while we were playing.

In the lower right corner I started a little mess trying to get the corner, and lost but I got a little more from my sides, and in the left side / center I got that living group, when it seemed that the handicap stone and another one were dead and my stones completely surrounded. 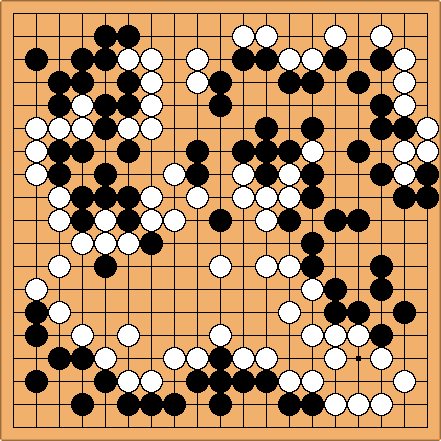 The next one was against a 6k with 9 handicap. I got literally sweeped. I missed the correct defense of a small group and he started a ko that destroyed it, because I hadn't any ko threats. I think that with this group I was also losing anyway. As always, play to connect your stones and divide white, don't get surrounded and don't overprotect.

"1r torneig de go al carrer" (playing as 20k). There I met Artur Honzawa and won twice one friendly without handicap, one official and tougher where he gave me 2 stones... a really head-sicker game. I got almost all corners and sides, but he got all the center but with a few weak points. I invaded the center and eventually lived, and he made a mistake (after 30 minutes trying to kill a group... who doesn't?) and I killed maybe 15 stones... he resigned but his defense had been very tough.