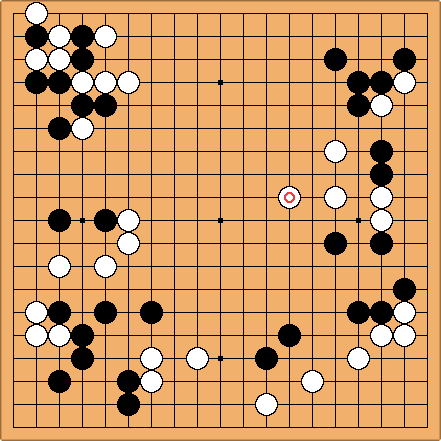 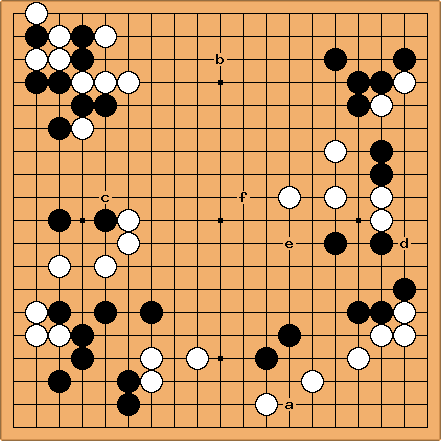 I like Black's position more. Right now I would like to either cut off White at a or take the big point at b. c and d look like the most thickness oriented moves, but I feel Black is thick already. Maybe those moves are enough to keep up the pressure.

unwaxed: I am watching this game on IGS. Currently it's the 88th move. The 65th move is at e (I edited the above diagram to add the point e). Then White played tenuki. It seems Black jumped to e to attack the white group, so at move 87 Black played at f after finishing the battles on the left side.

HolIgor: It is fun to watch Yamashita Keigo play. Black won the game by resignation after a big and bloody fight.

unwaxed: O Rissei also did a wonderful job. At about move 115, the white group on the right side was surrounded. It seemed there was no way to escape, nor was there sufficient room to make two eyes. An observer on IGS even claimed if White can survive, he wouldn't play Go any more. Though many disagreed with him, no one seemed to know how to save the white group. However, O Rissei just continued playing as if he had already read out the result. When I saw the white group eventually live; it was among the most wonderful moments for me, a kyu player.

HolIgor: In the first two games of this Kisei title, O Rissei showed a fascinating ability to build eyes and survive with his groups. Yet he lost both games.