This question arose from a remark by Herb Doughty. He said that either player could force a parallel fuseki.

While that is not strictly true, if each player occupies two of the four corners, either player can guarantee that adjacent corners will be occupied rather than opposite corners. For example: 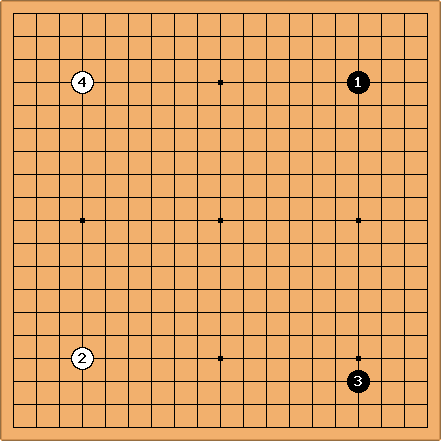 After Black 1 White plays in the opposite corner, leaving the other two corners miai. 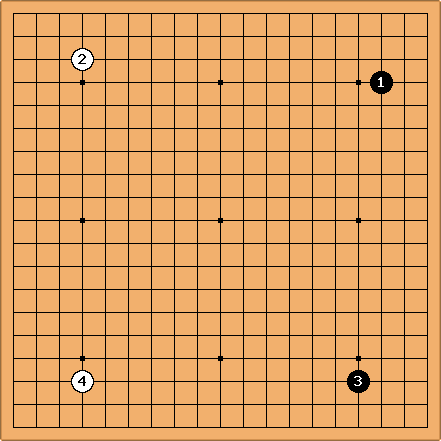 When White 2 occupies one of Black's adjacent corners, Black 3 occupies the other. Now White must occupy the last one, producing a parallel fuseki, or allow Black to occupy his third corner.

White invites crossed, Black accepts and has the better chance.

White prevents crossed and has the better chance

White prevents crossed and has the better chance

White invites crossed, Black refuses and has the better chance

White prevents crossed, and Black has the better chance

(*) The result undermines the assumption of equal number of games played with both fuseki. More later, hopefully by others too.

Bill: Suppose that there are only 2 players, Black and White. Then x + y = 1. (Of course, they then know each other's interest, but they still play as though they did not.)

That leaves us only two options:

White prevents crossed and has the better chance.

White invites crossed, Black refuses and has the better chance.

All games are then played parallel.

What you want to say is that their winning percentages add up to 1. I assumed their strength to be equal and thus their winning probability equal to 1/2.

I have a random question on parallel vs. diagonal fusekis. Does one require more fuseki strength then the other? My instinct would be to assume that a parallel fuseki requires less fuseki strength because the relationship of the your two corner stones makes them easier to defend then two stones diagonal from each other.

If this is correct then white should force a parallel fuseki unless she feels that her fuseki strength is at least comperable to that of her opponent, and black should seize the opportunity to play diagonal fuseki if he feels he is significantly stronger at fuseki then his opponent.

DaveSigaty: I think the situation is a little more complex than this. First I am not sure what fuseki 'strength' means especially in terms of parallel versus diagonal fuseki.

Assume that strength means something like knowledge of fuseki principles and the ability to actively apply them to game situations (call this type 1 strength). Then I do not think that either parallel or diagonal fuseki requires more strength (or perhaps we might say offers more opportunity to the stronger player). The issues that arise in the different types of fuseki may be different to some degree but the necessity to apply one's 'strength' successfully in order to gain some advantage over one's opponent is just as great in either.

Assume instead 'strength' refers to something like breadth of knowledge (gained either through experience over the board or through study) and the ability to use that knowledge to guide one's play in a specific game (call this type 2 strength). In this case I think that if one suspects that the opponent is 'stronger' (in other words more experienced or otherwise knowledgeable) then trying to steer the game into fuseki that one is most familiar with may be the safest course of action. Since most of us have played parallel more often than diagonal, the natural choice is probably parallel.

Personally, I have lived in Japan for a long time and over the years have played quite a few teaching games against pros. Here we are dealing with type 1 strength (actually even if they only have to resort to their store of type 2 strength, the latter is so extensive that it seems like type 1 to the lowly student :-). I assure you that the whipping (oh sorry, I meant 'lesson') will be equally 'educational' whether the fuseki is parallel or diagonal. Tricky lines just do not work (at least for Black) and 'safe' lines offer no safety.

At the same time I have also had many opportunities to crash and burn early on against club players, only to be told later, "Oh, that's the XXXX fuseki (joseki, tesuji, etc.); YYYY 9p played this new variation last month in the ZZZZ tournament." This is type 2 strength. Coming up short like this in the knowledge competition is frustrating in two different ways:

DaveSigaty: I just found the following on Jan van Rongen's

Cho Chikun Site (which by the way is fantastic). Jan has used the new Go Games on Disk CD to analyze Cho's games. Along the way he noticed something about Cho's choice of White 2 relevant to this discussion.

Where does Cho play the second move with White?

Now what does that mean? It probably means that stronger players would welcome a diagonal fuseki, which might be a little bit too slow for Black with 5.5 komi. As an example, take all the games in the database (from 1966), where Black plays a low Chinese fuseki and White opposes with two hoshis. White wins exactly 50% (of 102 games) when he plays the second move in the adjacent corner, and only 45.7% (of 116 games) when move 2 is in the diagonally opposite corner. There is only one possible conclusion: the players that played in the adjacent corner were the stronger players!