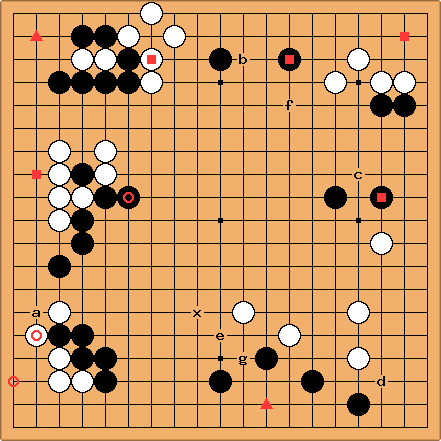 White has the next move, but there is so much to do that I could hardly call it sente. In fact, removing the bad aji at a seems urgent, whatever way Black would take advantage of it. On the other hand something like b seems urgent too, in order to keep

active and not under attack instead.

Overall the exchanges in influence vs territory look misdirected for White. So I'm giving Black an advantage of 5 points plus better thickness.

Andy: If it is miai for black to attack either of white's two weak groups, and white has no effective attack right away on any black group, maybe white should just take the big point d and see how black wants to proceed?

tapir: I was considering either e or f (but I played a very slow and slack move instead). a is too slow if you ask me, I am solid enough not to fear a ko.

Slarty: d is practically necessary (for point value and to make the white stones in the lower right work). After d, I count white reaching 20 pairs (40 points), while black has 16 pairs between the top left and lower side. From there, black will gain whereas white is in some sense maxed out. In my experience, white would need to start with around at least 25 pairs to try winning on points this way. Therefore, taking the urgent point at f (and fighting) looks like the best play. As black, I'd otherwise play one space to the right of f.

tapir: If I consider Black answering d at x... I prefer preventing x in almost sente with e. I am kind of puzzled that most answers don't even consider the moves that I feel like playing. b I don't understand, blind spot.

Dieter: I agree with f being a natural move for attack, splitting the two weakest black groups. The problem for me is that White

is not really thick, which is why I thought of the awkward b.

I hence agree with Andy's observation to deal with miai by taking the big point d. I disagree with e: it has a pure reduction value. I would also not build here as Black, with something like x, since g will help to cut through the ogeima.

tapir: Can you give some variations you have in mind for b. This is really a blind spot for me.

This is somewhat heavy for Black.

Here, Black jumps out lightly. I believe this is his best choice.

In this fighting variation, Black is very heavy after White jumps out at a. I don't think Black needs to fight here, just reducing the scope of that ponnuki group is good enough.

is tough, and a blind spot for me.

in this diagram will make some points by enclosing the ponnuki group. Instead of

, white can (is forced to?) continue fighting at a.

Black has to fight sometime, and could pursue this line for a tight resolution to the top side. It's probably true that white has no better fight after Var 2, and black would have enough points even after white d.

The trouble with x and e is that practically nothing in the center (including white's keima) is settled or thick. This adds to the difficulty of making territory in the center...it's all up in the air as long as things are running. That's why I'd tend to look for tight moves representing definite gains in shape or points. 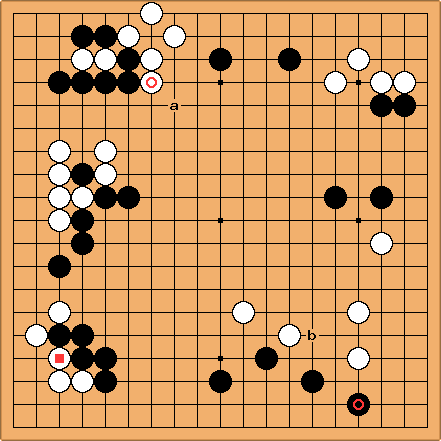 tapir: Well there is another way to evaluate position by counting "bad moves". I see three, two white, one black, but there might be more.

is a standard continuation after the 3-3 invasion, but there taking a liberty has some effect (a White hane next is sente against the corner and therefor impossible to cut), here it is just slower than jumping out with a keima at a (or denying the black stone on the top an extension).

missed the opportunity to build the moyo at b.

is responsible for the awkward shape in the corner which is ko and wasn't even sente etc. Simple 3-3 invasion (instead of the 3-4 attachment) seems better in hindsight. P.S. I like the variations Dieter gave for his inside attachment in the black extension. It starts looking like a pretty good move to me. There is however a ladder to mention (which works for White now).