I lost the game by 30 points, but at some point I made a san-san invasion that would have been worth about that much! Here's what happened 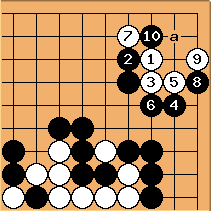 Black 4 is the key move. 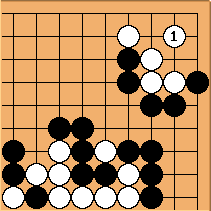 Can White live? Can White get seki? Can Black kill? 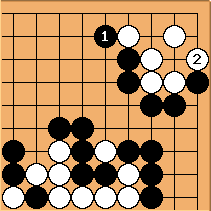 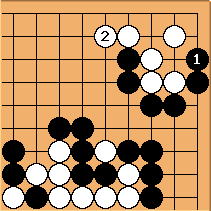 If Black pushes at 1 here and White runs, the outcome is complicated, but I think White dies. The follow-up would be something like the diagram below. 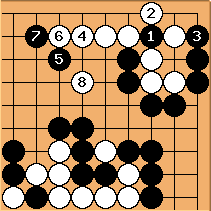 From here the outcome depends on whether White can make another eye or kill a black group. The former is unlikely; the second may be possible, Black has many weaknesses here.

White 4 looks very slow to me. Why wouldn't it be at 6 or 7? Or even an ogeima up to the third line? I think White should live pretty easily. -- adamzero 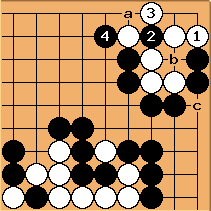 Instead of running, if White tries to ensure two eyes in the corner with 1, it looks like she wins.

Migeru: The reason is that 3 and a are miai for an eye, and Black can't play at b. In fact, it is not necessary for White to play at b unless Black plays at c. 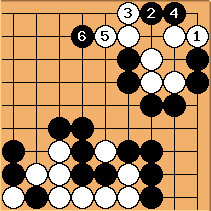 jsha: Well, I've had second thoughts on this variation. What about this version? 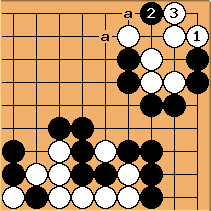 Migeru: Yes, how about it? I think a are miai for an eye. 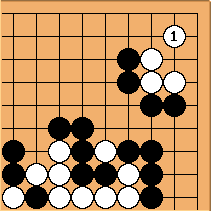 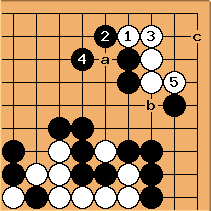 With a black stone at b, the status of the white group depends on sente (see L1Group) so one might assume that the extra liberty makes the group alive. However, I am not sure of this. The vital point of the group is at c. 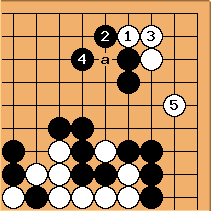 Shanghai: Actually, Black 4 is better. You could play 4 at a, but if White later plays hane just above 2, the exchange that follows is sente for White. With Black 4 in place, the hane by White just above 2 is gote. This sort of thing matters in a close game.

Also, I can't take credit for the successful 3-3 invasion I suggested - it's a common variation on the best-known one, and was around before I was born. :)