Marek Kaminski, but everyone calls me Kamyk. :) I'm a 25-year-old student from

My old nicks on KGS are: Marek, Malaoponka, Kamyk, kamyki,
izgonjes, and others :). I still use Kamyk.

You can find me on KGS, wBaduk, IGS, FICGS, PlayGo, and sometimes on Yahoo. I was playing in Ninja Tesuji Clan team (NTC) on KGS. And won clan brawl with my team. 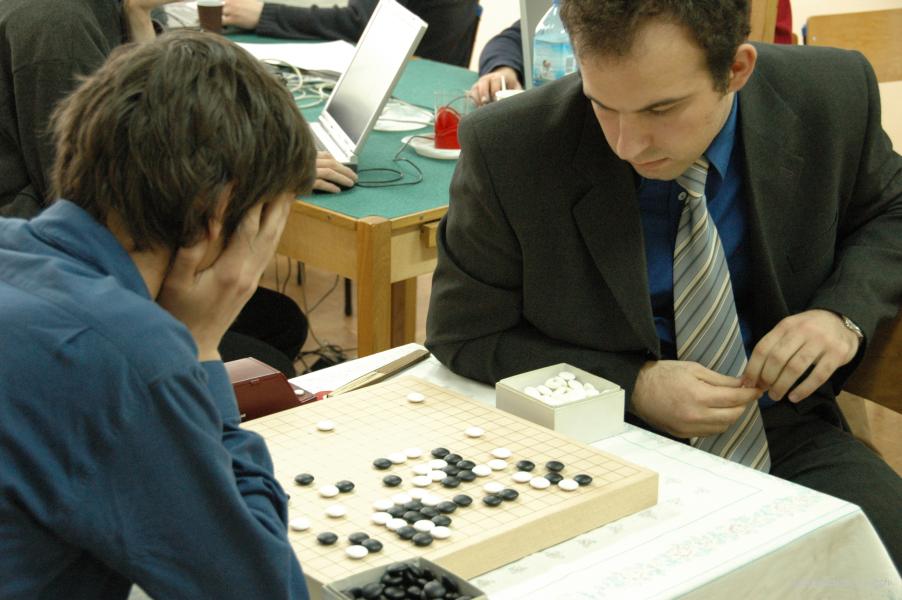 Polish Young Masters League--finished with a score of 5-2.

European Pair Campionship 2007 Bronze Medalalist with Marika Dubiel. On photo game with a Pair from Czechia(W).Result: b+0,5

Some victories I'm proud of:

I recently stopped playing on wBaduk. In March 2006 I was 4d on Oro, but I left. It's a great place, with an English interface, where you can take a break from KGS. :) There are far more Go players there than on KGS or IGS and, most important, you can find a lot of players there who are stronger than you. However, I remember wBaduk as a bloody place--"kill or be killed." There is no gentle GO there. But I like that--for example, the great race to capture--that's why I decided to go back to Oro. I just love it there! :)

Yes, Yes, Yes ! In 2009 Im strong enough to play as 7dan lvl on Wbaduk(old Oro) Name has changed, ranking and players the same. I have last target on this server. Last - 8dan grade would be nice to get in next 1 year.

I'm wondering ... How much time (practice, lessons, lectures, tournaments) do I need to become a really solid 6d or stronger by EGF standards? Three years? Maybe even four or five years?

Yeah! I've been playing this game for only three years. Two friends who are 6d EGF told me that my progress is very fast.

I'm still impatient, so my next goal this year will be to practice patience. Patience is a virtue, says tasuki :-)

Maybe it's time to go back to IGS or TOM go server. I should definitely play more slow games.

FICGS is mostly a chess server, but now you can play Go there too. FICGS is very similar to Dragon Go Server. The normal game time there is 30 days per game and 1 day per move. :) It's hard to get used to this slow pace in Go. Also, playing me at this very slow rate are opponents who usually know me from blitz games... what madness!

I have also created a new account on Little Golem. It's a fun place and I'm there just for fun--I want to win some 9x9 and 13x13 tournaments. :) Of course, I've already forgotten my password.^^

I want to restart my adventures on TOM Go Server, but I've forgotten many things about it, mostly what some of the buttons do. Could somebody remind me how the interface works there? I hope someone will help me with this.

I want to thank mychew and some people from the Chinese Go School (a free KGS lesson room)--after I asked for help with this problem, they provided it. Thanks!

If you want to play on TOM and you don't understand Chinese, It's good to visit the Chinese Go School room first. :)

Also, take a look at

http://go.uwcs.co.uk -it's the University of Warwick Go Society site.

Much time has passed ... Even so often do not look here :) I have currently 4dan EGF. I do not play too often in tournaments. Dan plays 5-6 players on KGS - of which I am extremely proud of.

In 2012, we start with Kate from the completely new initiative - keeping a blog about Go, Pair Go and travels. Blog is to promote intellectual pastimes - such as Baduk among Polish of all ages. :) It's also combining business with pleasure.

The blog is in Polish - but google translate does very well. Feel free to visit us: