In Japanese, the term maniawase is used to describe a play that is played to gain a temporary advantage, such as sente, even though it is not completely satisfactory, because, for instance, it may leave defects behind.

Hane Naoki says, in Understanding How to Play Honte, that "No matter how much it defends in sente, a move that leaves behind targets is a maniawase ". ("いくら先手で守っても、まだ狙いが残っては、「間に合わせ」。")

John F. did point out a slight shortcoming of the word "makeshift" on the baai no te page, but even so I propose that maniawase be rendered in English as makeshift, as it seems more concrete than other such possibilities as "expedient" or "temporary measure".

The following example is taken from game 6 of the 1992 Meijin title match between Kobayashi Koichi, 9 dan, and Otake Hideo, 9 dan. Kobayashi played white. 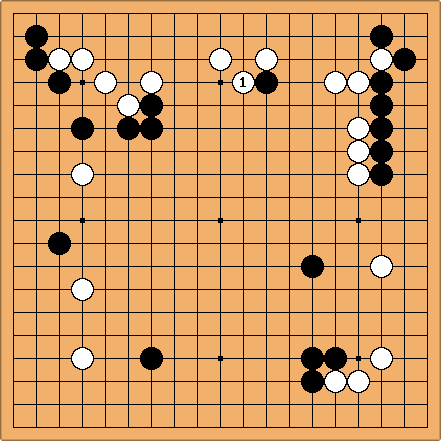 White uses 1 to settle the top right quickly, giving him time to play the following tough-minded sequence on the left side, but at the expense of shape defects. In Tournament Go 1992, John Power translated the relevant comment of Takagi Shoichi, 9 dan, as "makeshift". 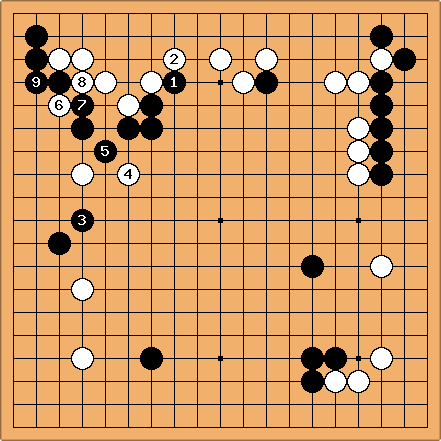 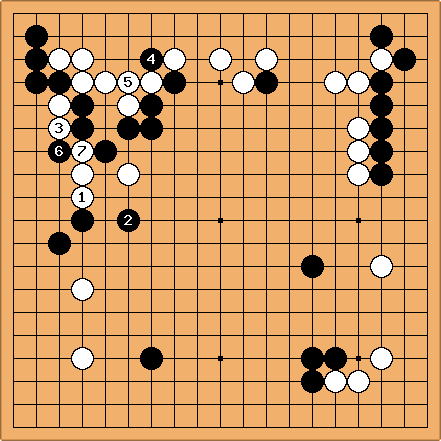 And White managed to pull his stones out. Black, however, eventually won by 3.5.

In this example, Hane Naoki suggests two ways to handle the situation. 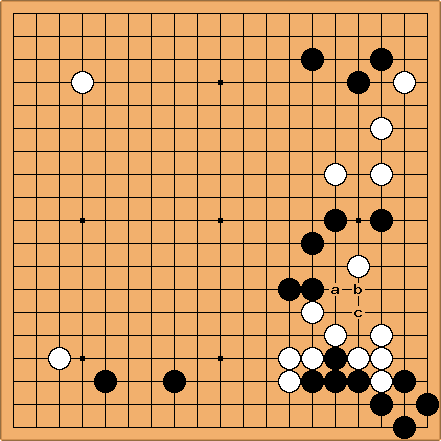 In this position, White should not play tenuki, because Black would begin the indicated exchange, which would leave White without eyes and heavy.

White needs to find a move, and so Hane recommends the following as honte. 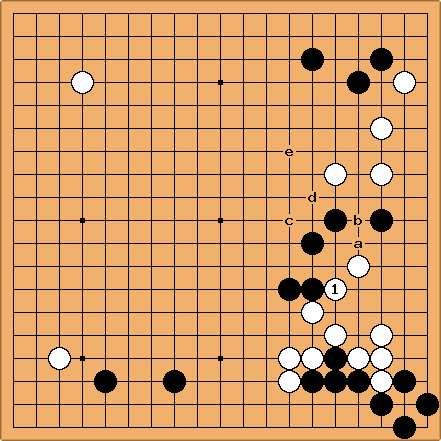 White's move at a looks modest, but it makes the stones alive and looks forward to counter-attacking with the indicated sequence. This is honte.

However, Hane also discusses another move, which he does not recommend, but calls maniawase. 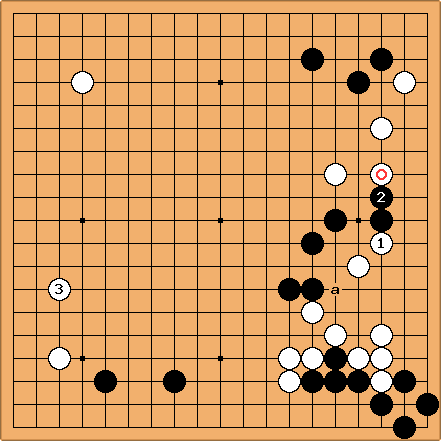 The advantage of this move is that it preserves sente, allowing White to play a big move elsewhere, but the compromise is that the marked stone is damaged, and Black has forcing moves beginning with a.

I think "makeshift" is a good enough term for such a play, as it captures the sense of a temporary arrangement, but not one that is expected to endure. Under some circumstances, it might be reasonable to play like this, as Kobayashi did above. It is distinct from baai no te because that term just means a move that fits a particular situation, rather than a potentially useful, but flawed, improvisation.

As a footnote, the word "maniawau" means to get there in time, e.g., to catch a train. "Maniawaseru" is the causative form, i.e., making something to be in time, improvising, meeting the immediate needs of the moment and so on.