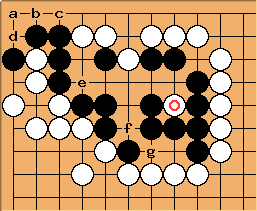 LukeNine45: Black already has an eye at

that can't get removed. Black can get an eye at a or b if he moves first in the upper left, but if white plays c there first he cannot (if black b, white d and the eye is false). However, if white plays c immediately, black can get a second eye in the middle. So we need a move that prevents a second eye in the middle, and makes miai of cutting at e and removing the eye with c. (f will not be an eye, because white can play g)

Therefore I propose this: 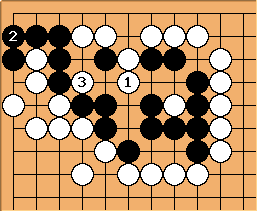 effectively cuts. See Box Connection-- this was very hard for me to see. Did you compose this problem after seeing that page? It is clever if so. :)

unkx80: Yes. It hit me why I never created any life and death question on the box connection -- a recurring life and death theme in my games, I don't know why. 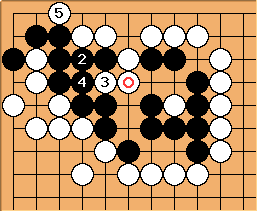 are miai, as are

Dieter: It took me more than 10 seconds to spot

in the solution diagram. Either my level is rapidly dropping or this is not really a beginner exercise. Very nice problem, that's for sure !

LukeNine45: Let's just say it took me a lot more than 10 seconds to find it... :) It did seem more difficult than average for a beginner exercise, though. I probably would not have solved this had it occurred in a game.

unkx80: Hmm... I don't know. This problem was composed on the spot at around 4 am, so perhaps I misjudged the difficulty. Time to move the problem to a more appropriate place?

Alex Weldon: It seems like a typical unkx80 "beginner" problem. I've noticed that a lot of yours are harder than the others. I think I just realised why, though. You seem to be (perhaps unconsciously) defining a "beginner" problem as one where incorrect variations terminate quickly, and it is easy to see why they fail. The actual solution is often very non-obvious, but the problem is still "easy" in the sense that it doesn't require that much reading, just a lot of "thinking outside the box" (no pun intended, in this case)

Bill: I think unkx80 has in mind problems that he could solve when he was a beginner. :-)