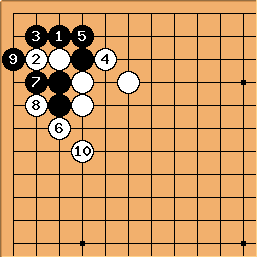 A battle in the upper left corner.

Fando: Obviously there's no need to consider the whole board situation. Upper left quadrant is sufficient. ;-)

Charles Matthews This joseki was thought pretty well dead amongst the pros (it appeared in the Kisei title match between Ishida Yoshio and Fujisawa Hideyuki in 1979, but that might have been nearly the end for this variation). Korean and Chinese players have been trying it, recently. Current thinking is that Black has a secure corner and no bad aji at all. White's open skirt on the top side is a big disadvantage.

On each size of board, though, the exact trade-off between territory and influence would have to be reconsidered.