Does anybody have any english translations of the following korean words and phrases?

You can use the online korean-english dictionary

http://endic.naver.com/search.naver. It even has entries for special baduk terms like PoSeok. Alternatively you can use the search plugin for Mozilla/Firefox (

백의 수순 (Paek-ui su-sun) White's ???. Not in my dictionary. Korean Go Terms page says su-sun is a move that makes a previous bad move good, however, seeing it used in context in the Korean go book I own, it looks like it's an exchange of moves, a way of playing, or a move order. This would accord with the previous term.

John F. This susun is the same as Japanese tejun, which I see has a page on SL but not a very accurate one. The usual way to grasp the usage of tejun/susun is to supply the word 'right' (here: right order of moves for White).

deg This diagram has the title '백, 두타움' So my interpretation is 'White feels good' 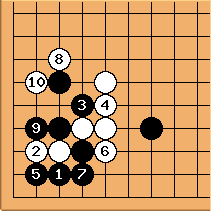 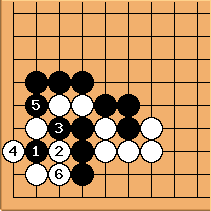 deg The title of the diagram above is '흑, 우세' This does not accord with the translation, unless it is construed as 'black (inflicts) pain'

Alex Weldon: Heh. Talk about ambiguity. My dictionary gives two definitions: 1) be put to shame/humiliated, 2) be superior/dominant. Obviously, here it's the second definition.

You'll find it a lot easier to get help if you give us some sort of context. Is the book you're reading a state secret?

deg Book: ISBN 89-7067-156-0 Context: The context is 'Black/White <insert word>' as the title to a diagram. e.g see above. If the diagrams would be useful I'll put them in. There's more (hangul) text with the diagram too. Finding the correct symbol is a laborious process on my system, so I'm reluctant to list this text.

John F. Aha - joseki book by Seo Neung-uk. If you have a recent GoGoD you can look up hangeul easily and copy and paste the html version here.

deg I have a recent copy of GoGoD (and a machine that runs MS Windows). I was able to make korean characters appear in a green box using the dictionary program, but could only save the characters as .bmp files. Although I selected an html option, I don't know what that did.

YY? Here are some more illustrations and additions to the list:

수습 (Su-seup): coping with, making the best out of, saving. It means "managing orderly a chaotic situation" or"taking care of a bad situation."

노림 (No-rim): a noun form of 노린다 literally meaning "(look and) aim intensely." However, it often denotes "hidden agenda behind a move" and "actual benefit of a move." 노림수 is a move with hidden agenda.

옹색 (Ong-saek): worse off, embarrassingly unsatisfactory, (depending context, it could mean "of poverty"). It illustrates "reaping little return from your investment" or "a situation wherein your stones are alive without influence or material gain (hence, living embarrassingly in poverty :o)." 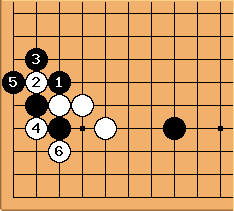 In particular, I'm trying to figure out the word "편함" in context. 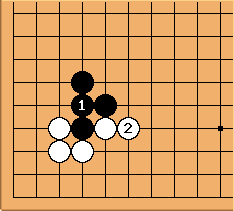 Alex Weldon: It must be "Bad shape for Black," since the caption says Black, "u" shape. I looked u up in my dictionary to verify, however, and it seems to be a positive thing, meaning "fine, excellent, superior." That can't be right, since Black's shape is clearly bad in the diagram. Perhaps u-hyeong doesn't mean the same thing as u and hyeong as individual words. Maybe John F. knows?

John F. This one means "stupid shape" (gukei in Japanese).

Once translations have been found, those entries could be put into Korean go terms if appropriate.

Thanks for any help given.

Alex Weldon: As a gesture of goodwill, I have changed my romanisations on this page to what I believe is the system John F. is suggesting.