Kill With A Borrowed Knife

Part of Secret Art of War

Fighting with a borrowed knife means to turn the opponent's weapons against himself. It is a very subtle thing to do - instead of fighting on your own, you assess the opponent's strengths. Then you play in a way which on the surface looks like you are complying with the opponents wishes, playing in a way where the opponent usually excels. Because of his confidence he will let down his usual guard and this is the time you strike him.

The following is a good example of this stratagem. White is playing against a player who is strong in local fights and has killer instinct. Normally, White should avoid fighting head on with Black, if she knows that his reading skills are superior. 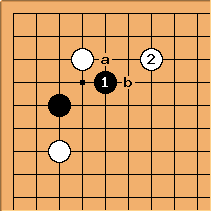 In this position after Black plays 1, the usual sequence is White a, Black b, White 2. But here White plays 2 and invites Black to cut through at a. A fight will ensue and that is to Black's liking as he is good in fighting. Let's see how this strength of his is now turned against him. (See also 19 point trick play). 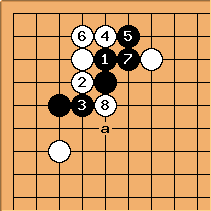 Black starts his operations with 1 and cuts off the white corner stone. It looks like White is putting up strong resistance, but actually White is planning to sacrifice the corner. Black's last chance is to play at a instead of 5. But Black's strength is turned against him: he has read out that he can capture the corner and does not have to worry about the cut. He is confident and goes ahead, not taking his usual guard. 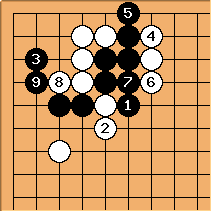 Black plays 3 and he's happy about the killing the corner, and it looks like White is putting up desperate resistance, but ... 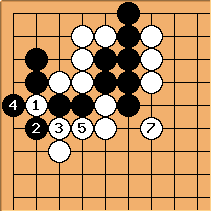 Actually White is sealing Black in. White 7 is the final nail in Black's coffin. 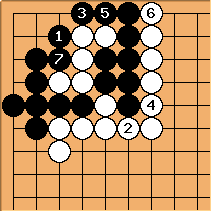 With 7 Black finally captures the corner. But it is a rude awakening. 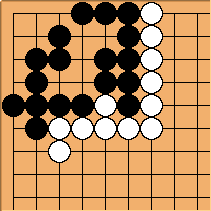 All in all Black has made a mere 18 points in the corner, while White has built a magnificent wall. If this were to happen in a game of stronger players, the game would be over by now. Black's reading abilities have been turned against him - he has defeated himself.

TakeNGive 10k: Thanks for the explanation. A quick question -- is this what is meant by amashi strategy? 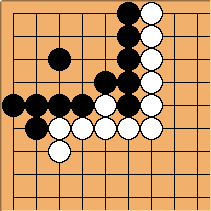 To show just how huge Black's disadvantage is, we show this tewari analysis. Black has captured six white stones. If we remove six black stones at the inside, we get this position. Black's position would be similar to this one where no stones have been captured. Looking at this diagram, Black's disadvantage is obvious: He has clearly spent too many moves for his territory, while White has spent her moves in a logical way to build an impressive wall. 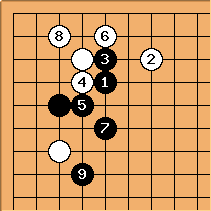 There are several ways of foiling this trick play, but most go something like this one. After White 6, Black does not sink all his strength into capturing the white corner, but rather defends his weak point with 7. White saves the corner stones with 8, but after Black 9, White's stones are too low while Black is developing nicely (note: normally the white 4-black 5 exchange is played later in this trick play. Even if it is left unplayed, black can answer at 7 and play as in this diagram)

Dieter: According to Ma, the crux of this stratagem is to make use of contradictions in your opponent's direction of play.