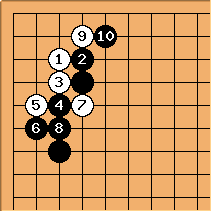 This is a common 4-4 point enclosure joseki. 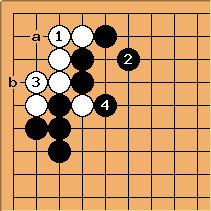 can also be played at a. In fact, it is the most common reply in professional games. 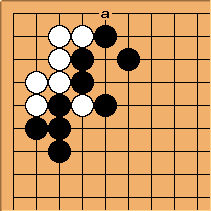 The group in the corner is alive, as discussed in L+2 group.

However, a black descent at a is sente.[1] 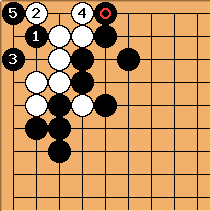 If White tenukis, Black can start an approach ko with the sequence from 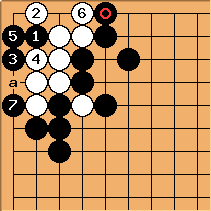 is a mistake. After

, white is caught in a shortage of liberties and is unable to play at a. 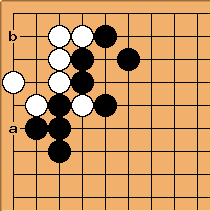 However, the descent at a is sente.[2] 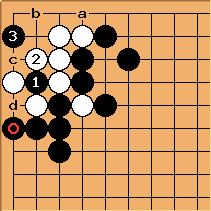 followed by the placement at

is the tesuji. After which, a and b are miai, while c and d are also miai. White dies in a bent four in the corner dead shape.

I'll comment that, because Black's threatened ko is indirect, one cannot assume it is really sente until the latter stages of the game. This may affect fighting on the outside.

[2] Note however that it is usually an endgame mistake to play the descent. Instead, Black should start at b.

Bildstein: That's very interesting. Can anyone explain why? 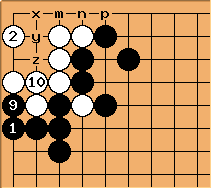 tderz: White will have about 5-6 points. (depending on the timing of the n-m-p exchange). 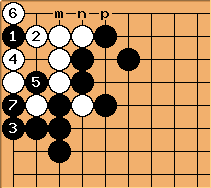 tderz: White will have about 4-1=3 points or less (depending on the timing of the n-m-p exchange).

Conclusion: starting with b in dia.[1] seems to be about 2 points better for Black, and it seems to me that Black is relatively free to chose when to play, because White has no sente variation herself for improvement.

I hope that no errors crept in.