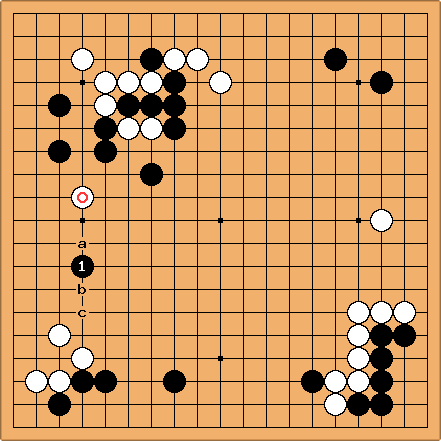 Bill: I like the two space high pincer at

. I play high because I am attacking, not trying to make territory. A low play makes it easier for

to run. One space closer (a) would make it easy for White to give up

. One space further away (b) would give White the possibility of extending to a. Also,

looks at playing at c, which is a shape point for attacking White's stones in the bottom left.

Alex: This would have been my answer too, but it isn't the "right" move according to the Go World commentary. The "refutations" given are just single moves, not sequences, but Yamashita says that if 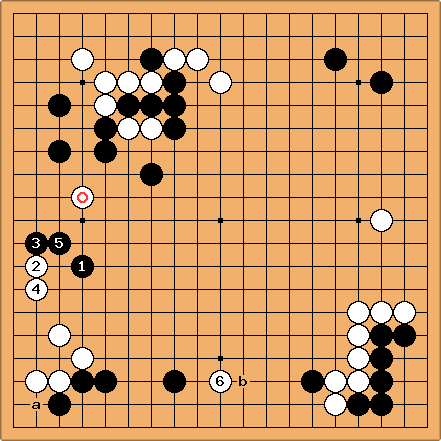 ... then White will simply slide to

as a possible continuation, which makes White's group nice and safe in sente and gives White sente to play

. Black seems overconcentrated and White's marked stone can still help a later reducing move (which could threaten to bring it back to life).

Of course, if White doesn't think this is good enough, he could also resist by playing

- since he still has a in the corner, this might not be unreasonable. If that's good for White, then Black might have to play

, which seems kind of submissive.

is the point both players were racing to play in the actual game (Black ended up getting sente and playing b) but maybe in this variation another point is bigger?)

Bill: Thanks, Alex, for giving Yamashita's reply. I did consider

, but would have tenukied instead of taking gote. 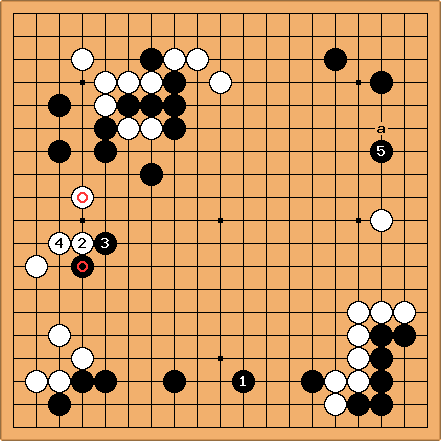 Alex: Tenuki seems like an okay idea... certainly, if White continued locally with

, then Black could just tenuki again and grab

and have a good game, but White would more likely play at a, since

seemed to be considered miai in the actual game, and Black would still have to think about how to play on the left.

Of course, since the slide is a little submissive, Black could just continue to ignore the left side for the time being and treat the exchange there as kikashi, but given that the original intent was to make a severe invasion, isn't it likely that it turns out to be aji keshi?

is an amateurish way to play on the left and it would be unreasonable for Black to expect this... rather, I think that if White was going to continue on the left, it would be by moving out towards the centre with the marked stone, attacking Black's invading stone first and leaving the option of connecting as insurance. 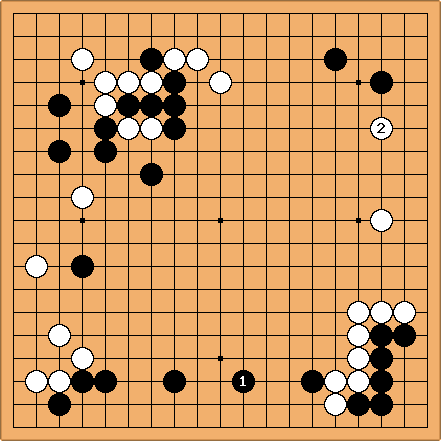 So, assuming that I'm right and

is the response to

, where does Black play next? This is probably outside the scope of the problem, but might be a good BQM if we get some discussion going.

John F. I don't say this with total confidence, but I'm curious whether there's some merit in a new way of looking at this. Assume that however Black plays (high or low), White ends up with what I have called a Go Seigen group - a group on the side between corner and mi-hoshi with access to the centre and which is completey safe. Because it is safe, there is nothing to be gained by attacking it, and so the area in the central part of the quadrant becomes either dead (the Chernobyl effect) or will tend to fall into White's hands in the endgame.

In the actual game (low invasion), Black got a low Go Seigen group of sorts for himself in the lower left, which cancelled out the effect of White's group on the quadrant centre. But Black also got some territory on the left, so can be said to have made a local gain at this stage.

With the high invasion, assuming the analysis given, White and Black again turn the quadrant centre into no man's land, but Black gets no sure territory on the left, or only a little if he plays the gote sequence shown.

Another way of viewing this, is to say that the quadrant centre is or will be an area of (a kind of) thickness, and since it is wise to keep away from thickness, the low invasion is to be preferred.